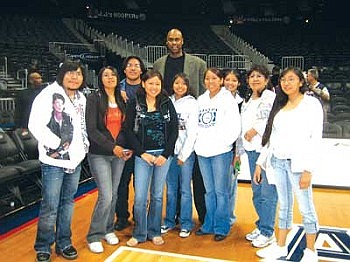 ATLANTA, Ga. - The Atlanta Hawks defeated the Milwaukee Bucks 115-96 on March 26. Seven members of the Hopi High radio class saw most of the fourth quarter action and were excited to stay after the game to meet Atlanta Hawks Assistant Coach Alton Lister and player Josh Smith. Lister said that this is his first year coaching at the professional level and that he previously coached at Mesa Community College for seven years.