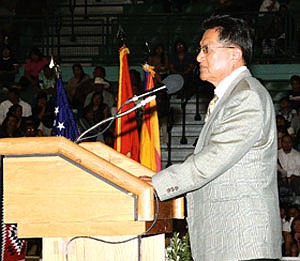 KYKOTSMOVI-After five months of waiting, battling and perseverance by the Hopi people and government, a decision regarding the fate of Hopi Chairman Ben Nuvamsa's stay in office was handed down Monday, Aug. 27. Through this ruling, the actions of the Hopi Tribal Council and Vice Chairman Todd Honyaoma to nullify and void the Primary and General Elections, were deemed unconstitutional according to the Hopi Constitution.