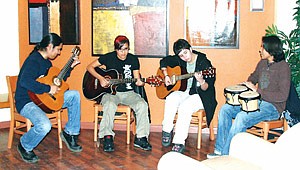 TUBA CITY-It has only been five and one-half months since Blair Quamahongnewa, member of the Hopi Tribe from Hotevilla Village, started teaching music at Tuba City High School but he has made such a creative impression at TC High and proven to be such a musical inspiration for his students, that several of his students from the fall semester's acoustical guitar class felt confident enough to try "jamming" at one of Tuba City newest public venues-the Hogan Coffee House located on Main Street in uptown Tuba.