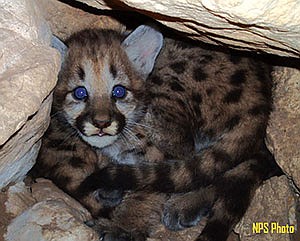 GRAND CANYON-Recently, three five-week-old mountain lion kittens were captured and tagged within Grand Canyon National Park by park researchers. The litter of three females was found by mapping GPS locations of their radio-collared mother. An attempt will be made in a year to recapture these kittens after they have grown large enough to wear a radio collar. These kittens will provide important information on dispersal and movements of mountain lions with origins inside of the park.