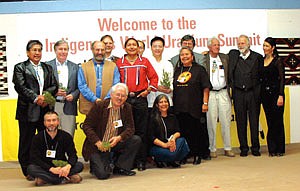 WINDOW ROCK-Six individuals, including a Navajo chapter president and a Southwestern non-profit organization, were honored on Saturday, Dec. 3 with the 2006 Nuclear-Free Future Award during the first Indigenous World Uranium Summit.Red Valley Chapter President Phil Harrison was among the people honored for their efforts to resist the spread of nuclear proliferation and its waste while educating those their live near. Also honored was the Southwest Research and Information Center of Albuquerque which has assisted Navajos force the clean-up of closed and abandoned uranium mill tailing sites and most recently has helped prevent the re-introduction of uranium mining and processing in the Church Rock and Crownpoint, N.M., areas.The awards were presented during a banquet at the Navajo Nation Education Center.