A dog was rescued from a canyon in Little Panted Desert Park near Winslow Jan. 16. Dispatchers received a call from a distraught owner and Navajo County Sheriff’s Office Sergeant Chisholm responded and determined a dog had fallen into the canyon. The dog “Lila” was located and rescued uninjured with the help of Joseph City Fire District Rope Rescue Team, Sheriff’s Auxiliary Volunteers of Navajo County (SAV) and Arizona Department of Public Safety. 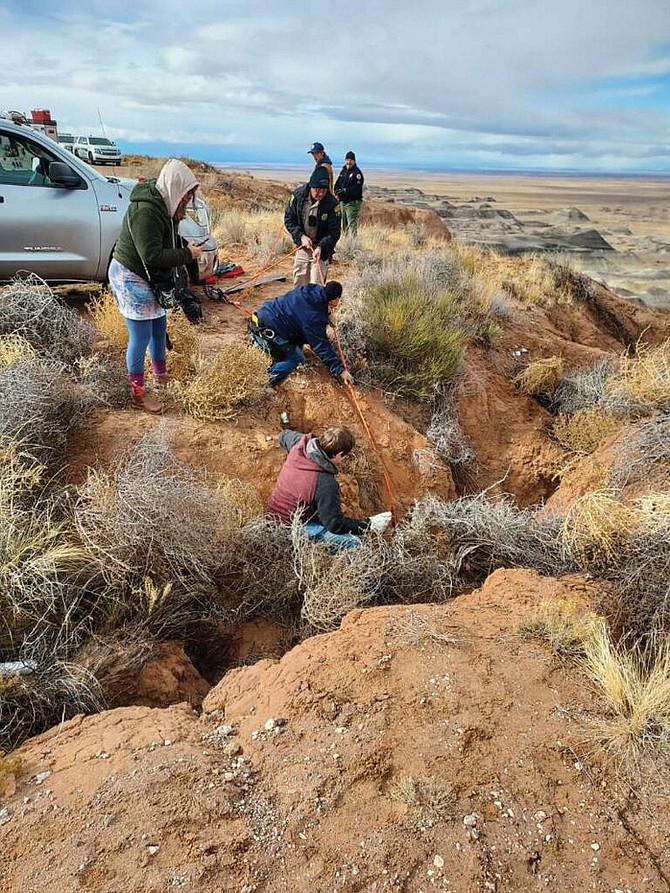 NCSO Sergeant Chisholm responded to the area of Little Painted Desert Park north of Winslow, along with Sheriff's Auxiliary Volunteers of Navajo County (SAV) Stuart, and Arizona Department of Public Safety Trooper Hancock. Upon arriving in the area, Law Enforcement located a distraught female subject who was confirmed to be female in need. She reported while walking her two dogs near the edge of a canyon, one of them fell into it and she was unable to locate her dog or see if it was possibly injured.

Responding law enforcement officers walked the edge of the canyon looking for the dog and heard a dog whimpering in the crevice. The dog was located however, they were unable to scale down the 30-foot crevice to rescue the fallen animal. Joseph City Fire District Rope Rescue Team was called to the location for assistance. Jeff Dixon with the Rescue Team was able to safely rappel down the side of the canyon and rescue “Lila” the lost dog who was uninjured in the ordeal.

Navajo County Sheriff’s Office is grateful for every single partnership we have in our community. This was a great ending to a scary situation."