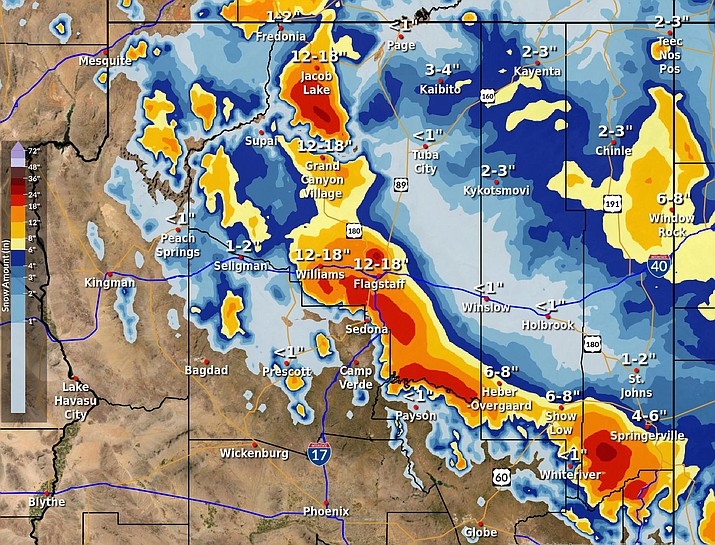 WILLIAMS, Ariz. – Two major winter storms are on the way to northern Arizona this weekend, according to the National Weather Service in Flagstaff.

Both storms are expected to produce snowfall. The first storm could bring 6 to 8 inches of snow in Williams, and 8 to 12 inches in Flagstaff. The second storm is projected to bring 4 to 6 inches to Williams and 6 to 8 inches to Flagstaff.

Winslow, Tuba City and the western Navajo Nation can expect up to two inches of snow.

An increase in wind is expected Sunday and will continue into Monday in northern Arizona, with wind gusts expected to reach 15-25 mph.

Hazardous travel conditions are expected. Areas of snow and blowing snow will be likely above 6,000 feet, leading to areas of reduced visibility.

The high for Williams on Saturday is expected to reach 48 degrees. Winds are expected to be between 11 and 17 mph, with gusts as high as 28 mph. Chance of precipitation is 100 percent, with snow accumulation of 6 to 8 inches possible. The snow could be heavy at times. Areas of blowing snow after 11 p.m.

Sunday’s high will be 36, with south winds from 6 to 13 mph, with gusts up to 21 mph. Chance of precipitation is 60 percent. Snow accumulation of 1 to 3 inches possible.

On Monday, there is a 90 percent chance of snow with new snow accumulations of 4 to 6 inches. The low will be around 24 degrees with winds from 13 to 17 mph.

Tuesday could see snow showers after 11 a.m. with patchy blowing snow. It will be mostly cloudy with a high near 33. Chance of precipitation is 60 percent.