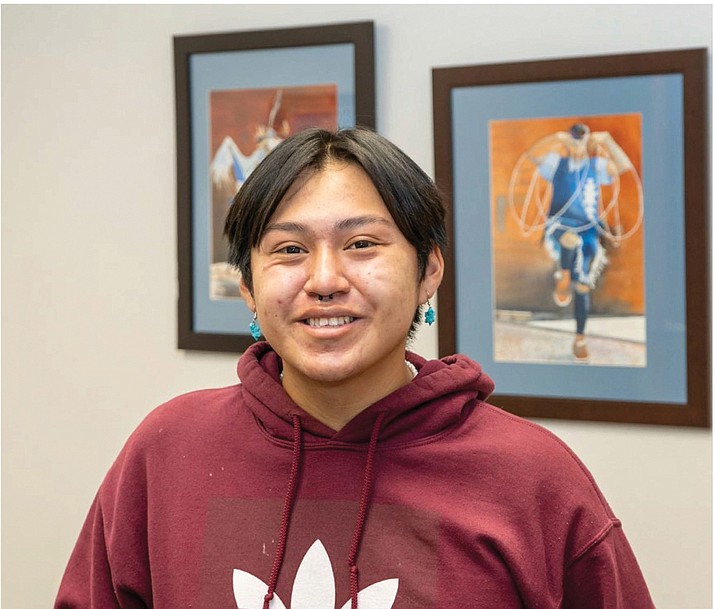 Leandre Frank, 17, is a Navajo Nation tribal member and a senior at Flagstaff High School. (Photo/FUSD)

Leandre Frank, 17, is a Navajo Nation tribal member and a senior at Flagstaff High School. His clans are Tachii'nii (Red Running into the Water People), born to Honaghaahnii (One Who Walks Around), his maternal grandfather's clan is T6dik'ozhi (Salt Water), and his paternal grandfather's clan is Tabqqha (Water's Edge). He is originally from the Central Agency of the Navajo Nation near Tsaile, Arizona.

Leandre is involved in many extra­ curricular activities including theater, the Native American Club, and the marching band.

"I did theater since my freshman year, so I've been doing it for all four years," he said. "I joined theater because growing up on the [Navajo] reservation, you don't really have a lot of interesting things to do. So, I chose [theater], and [I was not] sure what it was. I grew a huge connection to [theater], to the point where I looked into careers and colleges for it."

He is also involved with the Flagstaff High School's Native American Club.

"[I got involved] with the Native American Club my sophomore year online because I was really bored and I just wanted something to do, so I joined. I became an officer... sergeant-at-arms and then [in my] junior year, I [became] secretary, [and] this year, [I am] the vice president," he added. "I did Native American Club because I wanted to make Native [American] students here feel welcome."

Leandre is also involved in the color guard, which is part of the marching band.

"I didn't know what it was... I had no clue what it was until [my] freshman year," he said. "[One day], we were doing a choreography [exercise] for theater and then they brought in a color guard in person [for a demonstration] and it was really fun and I decided to join it for my sophomore and junior years, but I didn't get in. And then [in my] senior year, I actually got into it."

Leandre is enjoying his last year in high school and he is looking forward to graduating in May 2023.

He explained when he was growing up, he was always encouraged to finish high school and if he chose to, he could further his education by going to college. Although the end of his high school career is coming to a close, he is feeling a bit sad because he does not know what the future holds just yet. His tentative plan, for now, is to continue his education in general studies at Dine College and work toward obtaining a bachelor's degree, and he is thinking of New York University (NYU) or the University of Cincinnati.

"[The] University of Cincinnati has [a great] music [program that includes] theater," he said. "I've heard it's a really good program." As for a future career, Leandre said he hopes to finish college and start a career in teaching and conducting workshops, and he has dreams of performing on Broadway. For now, Leandre is focused on his studies and will be looking forward to May.