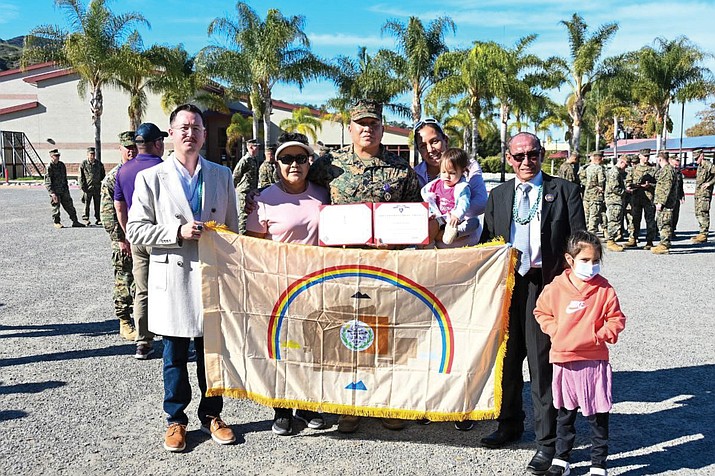 CAMP PENDLETON, Calif. — On December 16, Council Delegates Carl Slater and Pernell Halona attended a Purple Heart Ceremony for Navajo Marine Sergeant Alecsaiah Tree at the Marine Corps Base Camp Pendleton in California. The delegates presented a Navajo Nation flag for his heroic efforts during an explosion which occurred outside the Kabul International Airport in Afghanistan on August 26, 2021.

“On behalf of the Navajo Nation, the 24th Navajo Nation Council extends their appreciation to Sergeant Alecsaiah Tree for his courageous actions while serving in the U.S Marine Corps. May the Holy People continue to bless and guide Sgt. Tree during his time of healing,” said Speaker Otto Tso. “We continue to pray for all of our Navajo warriors in the U.S. Armed Forces who repeatedly put their lives on the line to protect our country and Navajo way of life.”

Sgt. Tree received a Purple Heart medal which is awarded to those who have been wounded or killed while serving in the U.S. Armed Forces. Tree was accompanied by his family and the 2nd Battalion, 1st Marine Regiment of the 1st Marine Division along with Battalion Commanding Officer Lt. Col. Glenn P. Baker and Regimental Commanding Officer Col. Brendan P. Sullivan.

“While in the line of duty, Sergeant Tree survived a devastating explosion and was presented a Purple Heart,” said Council Delegate Pernell Halona. “We are immensely proud to have a member of our Nation continue his military service to protect our people.”

Tree enlisted with the U.S. Marine Corps in 2013 and is from Flagstaff, Ariz. Tree is Kinyaa’áanii (The Towering House Clan) and born for Tábąąhí (The Water Edge Clan). His maternal grandfather is Áshįįhí (The Salt People Clan) and his paternal grandfather is Tódích’iini (The Bitter Water Clan). He is the son of Elfreida McCabe Tree and Philip Tree of Tolani Lake, Ariz.

“I’ve learned to enjoy the simple things in life, for I’ve been to hell and back to protect innocent men, women, and children who I will never see again. Not a single day goes by that I wouldn’t sacrifice my life to protect them from the evil in this world,” said Tree. “The same goes for my country, my loved ones, my friends, my neighbors, even those who don’t like me. I would do it all in a heartbeat.”

“The Navajo Nation gives its gratitude to Sergeant Alecsaiah Tree for his invaluable service to the nation,” said Council Delegate Carl Slater. “We are blessed and fortunate to have Sergeant Tree here with us today.”

In 1942, 13 of the 29 original Navajo Code Talkers joined the 1st Marine Division to fully implement the unbreakable code on the lands of Guadalcanal during World War 2.