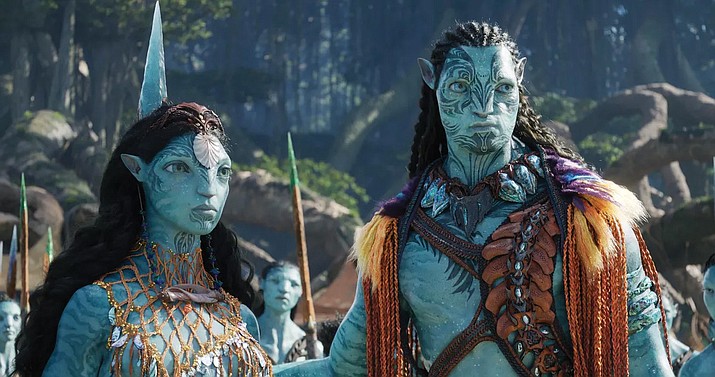 Comments by James Cameron have spurred criticism and led to calls for a boycott of ‘Avatar: The Way of Water’ by some Native Americans. (Photo: 20th Century Studios)

Following last month's release of "Avatar: The Way of Water" there has been quite a bit of buzz — both positive and negative — about the film, its success and what many are calling cultural appropriation.

James Cameron’s sequel to his 2009 blockbuster "Avatar," the highest-grossing movie of all time, has spurred criticism and calls for a boycott among some Native Americans.

"Do NOT watch 'Avatar: The Way of Water,'" Yuè Begay, a Navajo artist tweeted in a post that's been retweeted nearly 12,000 times. "Join Natives & other Indigenous groups around the world in boycotting this horrible and racist film. Our cultures were appropriated in a harmful manner to satisfy some (white) man's savior complex. No more Blueface! Lakota people are powerful!"

Some of the outcry stems from a recently published article in The Insider, where Cameron described his storyline for "Avatar" akin to the European colonization of the Americas.

Others have taken to social media, citing an article published in 2010 by "The Guardian," where Cameron shared an experience he had while hosted by tribal leaders of the Brazilian Xingu. Cameron has become an ally of the tribe’s efforts to fight a hydroelectric dam project in the Brazilian Amazon that some people say will ruin the ecosystem and their traditional way of life.

The comment has generated an overwhelming number of comments on the similarity of "Avatar’s" storyline to how Indigenous communities are still fighting for protections of their lands and their sovereignty.

“My initial thought is (that) James Cameron’s comments are wholly inaccurate,” said South Dakota State Senator Red Dawn Foster to Native News Online. “He has fallen into the trap of viewing the Lakota as the ‘ignorant savage’ when in fact, we not only had prophecies warning us of the hardships and destruction western expansion has certainly brought.”

“We bore witness to what happened to the Iroquois, Potawatomi, Miwok, Yurok and other eastern and western tribes,” said Foster, an Oglala Lakota citizen and Diné from the Navajo Nation on her father’s side. “That is why we fought so hard and are continuing to fight to revitalize our language and restore our traditional family structures, food systems, stewardship of the land, and spiritual practices.”

Others have cited "The Guardian" article, comparing Cameron’s comments to what’s currently happening in many Indigenous communities.

Rebecca Nagle, Cherokee activist and host of the “This Land” podcast, called Cameron’s previous comments “racist,” in a post on Twitter. In her post, she shared comments made by Otoe-Missouria and Choctaw multimedia journalist Johnnie Jae.

“Natives been telling ya'll James Cameron's "Avatar" is racist and creepy as hell. The way he talks about the Lakota in this article is absolutely horrible,” Jae tweeted on December 15.

“There are dimensions to [Cameron’s] insensitivity,” Hill said. “The generalization about suicide is problematic and lacks accuracy. The colonizer mentality that we were in those circumstances is us being doomed is wrong, but for us, we passed on our knowledge and our stories when snow was on the ground. That was a promise of survival.”

The National Board of Review and the American Film Institute named "Avatar: The Way of Water" as one of the top ten films of 2022. The movie has also received Best Picture and Best Director nominations for the 80th Golden Globe Awards.

“Hollywood needs to stop profiting off and exploiting the Lakota,” said Honorable Danielle Finn, a district court judge for the Cheyenne River Sioux Tribe and an assistant professor at Sinte Gleska University in Mission, South Dakota.

Native News Online reached out to Disney via email for comment on cultural appropriation in "Avatar: The Way of Water," but did not receive a reply as of press time.