Guest column: A screening can save your life during Cervical Cancer Awareness Month 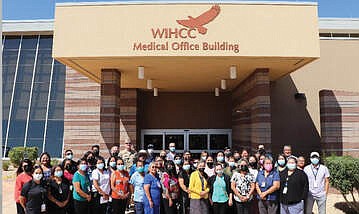 Cervical cancer was once a leading cause of death for women in the United States.

Today, prevention, early detection, and screening have greatly reduced the mortality from this disease. Still, over 14,000 women in the United States receive a diagnosis of cervical cancer each year.

According to the National Cancer Institute, more than 4,200 women died from this disease last year.

Quite simply, our goal is to eliminate cervical cancer. There are two ways to do this: prevention and early detection. Nearly all cases of cervical cancer are caused by prolonged infection with Human Papilloma Virus (HPV).

Vaccines are available to protect against the virus and prevent cancer from developing in the vast majority.

The vaccine protects against the high-risk HPV that causes some 70 percent of cervical cancer cases. The Center for Disease Control and Prevention (CDC) recommends vaccination for girls and boys starting at 11 to 12 years, a 2 or 3 dose series which can be given up to age 26 years. The HPV vaccine cannot cure any existing disease.

Regular pap smear tests can detect the disease at a precancerous stage, where it can be more easily treated. The United States Preventive Services Task Force (USPSTF) recommends screening for cervical cancer every three years in women aged 21 to 29 years. For women aged 30 to 65 years, the USPSTF recommends screening every three years with a pap smear alone or every five years if high-risk HPV testing is also done. Cervical cancers usually take years to develop, and may not show any symptoms.

If you get screened every three to five years, your chance of developing cervical cancer in the next few years is very low. The pap test can both detect cancer at an early stage when treatment outcomes tend to be better, and detect precancerous abnormalities which can then be treated to prevent them from developing into cancers.

Lifestyle changes to enhance cervical health include increasing fruits and vegetables that are rich in folate and vitamin A. Nuts like hazelnuts, almonds, peanuts, cashews, walnuts, and green leafy vegetables including broccoli and spinach are beneficial for cervical health. Women who smoke are more vulnerable to cervical cancer. Stop smoking to protect your cervical health.

During the month of January at WIHCC, we encourage women between the ages of 21-65 who have never had a pap smear, or those that have not been screened for five years or more to call to schedule an appointment. Additional appointment slots will be created for you to take care of your cervical health. To make an appointment, call (928) 289-6193 or (928) 289-8035.