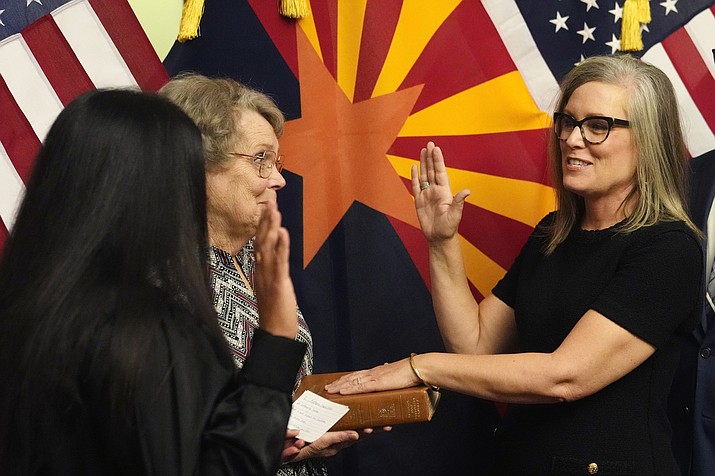 PHOENIX — Katie Hobbs took the oath of office Jan. 2 to become Arizona’s 24th governor and the first Democrat to hold the office since 2009.

Hobbs was sworn in during a private ceremony at the state Capitol as she formally took over from Republican Doug Ducey. A public inauguration for the governor and others taking statewide offices is scheduled for Thursday.

Hobbs was surrounded by her parents, husband and two children as she took the oath of office in the lobby of the governor’s office on the ninth floor of the executive tower on the Capitol grounds, according to a livestream of the event, which was not open to the public or media. Her mother’s joyous tears distracted the incoming governor, who paused to joke, “stop it, Mom!”

Afterward, she posed for photos with her family and signed a certificate.

Hobbs is the outgoing secretary of state and was previously a state legislator who rose to be the top Democrat in the Senate. As governor, she’ll have to work with a House and Senate narrowly controlled by Republicans. The new Legislature convenes for the first time next week.

Hobbs assumes control of a state with a strong economy and a solid financial position, with a large budget surplus forecast for the next fiscal year.

But there are headwinds on the horizon. Phoenix has some of the nation’s highest inflation levels and housing costs have soared as rapid population growth has outpaced home construction, belying the state’s reputation for affordability. And the water supply is constrained by drought.

Hobbs narrowly defeated Republican Kari Lake, a former television anchor who was backed by former President Donald Trump. She excited conservatives with her staunch backing of Trump, including his lies about the 2020 election, and her strong criticism of mask mandates and business closures due to the COVID-19 pandemic. But she struggled to connect with Arizona’s general electorate, which has repeatedly eschewed Republicans closely aligned with Trump going back to the 2018 midterms.

Hobbs is the fifth woman to be Arizona governor. The last Democratic governor was Janet Napolitano, who resigned in January 2009 to be U.S. Homeland Security secretary under President Barack Obama. She was replaced by Republican Gov. Jan Brewer.

The Arizona Constitution says state officers take their position on the first Monday in January. While Hobbs took office on schedule, the public ceremony was delayed because Monday is the observed New Year holiday.

Also formally taking office Monday were Democrats Adrian Fontes as secretary of state and Kris Mayes as attorney general, both of whom defeated Trump-backed Republicans who refused to concede and unsuccessfully challenged their losses in court. Mayes’s 280-vote victory was among the closest statewide races in Arizona history.

Kimberly Yee was sworn in for her second term as state treasurer and Tom Horne as superintendent of public instruction, a role he filled for two terms beginning in 2003. Paul Marsh was sworn in as mine inspector. Yee, Horne and Marsh are Republicans.

For Hobbs, the oath of office was administered by Roopali Desai, a recently confirmed judge of the 9th U.S. Circuit Court of Appeals who was previously represented Democrats in election cases and Hobbs as secretary of state.

Chief Justice Robert Brutinel swore in the other state officers.