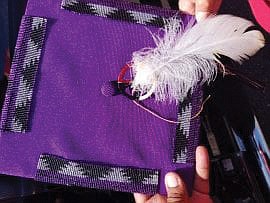 LaRissa Waln holds her cap she decorated for her graduation at Valley Vista High School in May 2019. The school would not allow any decorations on their caps or gowns. (Photo/Larissa Wahn family)

PHOENIX — A former Arizona high school student plausibly alleged that school district officials violated her religious-liberty and free-speech rights when they denied her request to wear an eagle feather over her graduation cap, a federal appeals court panel has ruled.

The 9th U.S. Circuit Court of Appeals reasoned that the student plausibly alleged that school district officials did not uniformly apply their policy against adornments on graduation caps.

Larissa Waln, a member of the Sisseton Wahpeton Oyate tribe, a recognized Native American tribe, asked the Dysart School District to accommodate her religious practice, as eagle feathers are sacred under Waln’s religious beliefs. Waln’s grandmother had given her an eagle plume, which had been blessed in a religious ceremony in South Dakota. Waln wanted to wear the plume at her graduation from Valley Vista High School.

School officials denied the request, citing its policy – “Students may NOT decorate their gown or cap.” On May 16, 2019, Waln went to her high school graduation in Glendale, Ariz., but school officials did not let her inside the venue because of the eagle plume on her cap. Waln and her father Bryan sued in federal court.

Waln pointed out that another student who graduated from a different high school in the same school district and same venue wore a “breast cancer awareness” sticker on his cap at graduation. She also alleged in her complaint that “[o]ther students in the Dysart School District had adorned graduation caps or wore prohibited items on their person during their graduation ceremonies.”

Defendants filed a motion to dismiss and a federal district court granted that motion. On appeal, a divided three-judge panel of the 9th Circuit reinstated her First Amendment claims in its Dec. 9, 2022, decision in Waln v. Dysart School District.

In her majority opinion, Judge Susan Graber first addressed Waln’s claim under the First Amendment’s free-exercise clause, which generally prohibits government officials from imposing substantial burdens on individuals’ religious liberty rights unless they do so under a neutral and generally applicable policy. However, as Graber pointed out, “General applicability requires, among other things, that the laws be enforced evenhandedly.”

Graber focused on Waln’s allegations that other students were permitted to wear secular symbols on their graduation caps. “If the District did not enforce the policy to exclude a student’s secular message then, in the absence of an appropriate justification, the District cannot enforce its policy to burden Plaintiff’s religious conduct,” she wrote.

The school district argued that its policy prohibiting adornments on graduation caps furthers its interests in maintaining the sanctity and formality of the graduation ceremony, avoiding disruption, and fostering class unity. But Graber noted that “altered graduation caps – whether with a secular message or a religious symbol – present a nearly identical threat to those interests.”

Graber then addressed Waln’s free-speech claim and found that she had stated a cognizable claim of impermissible viewpoint discrimination. While the school district’s policy on its face was viewpoint-neutral, the allegation was that it was selectively enforced.

Graber reasoned that Waln “has plausibly alleged a discrepancy in treatment on the basis of viewpoint.”

The school district also argued that it restricted the eagle plume for fear of an establishment-clause violation. However, Graber quoted from the U.S. Supreme Court’s recent decision in Kennedy v. Bremerton School District (2022) that the establishment clause does not “compel the government to purge from the public sphere anything an objective observer could reasonably infer endorses or partakes of the religious.”

Graber concluded: “Plaintiff adequately has alleged that the District violated her First Amendment rights to the free exercise of religion and to the freedom of speech. Whether Plaintiff can prove her claims is not before us. But the district court erred by dismissing her complaint.”

Judge M. Miller Baker, normally a judge for the United States Court of International Trade, issued an opinion concurring in part and dissenting in part. He agreed with his colleagues that Waln had sufficiently alleged First Amendment claims but held that her complaint fell short of showing that the school district had enforced the policy in an uneven manner. Another plausible rationale, according to Baker, was that the student who wore the breast-cancer message on his graduation cap simply violated the policy and was not stopped.

“Waln needs to plausibly allege that the District denied her permission to adorn her cap while permitting the young man in question to adorn his cap with his secular symbol,” Baker wrote.

However, Baker partially concurred because he wrote that the “district court should have given Waln a chance to remedy her deficient complaint with additional factual content.”