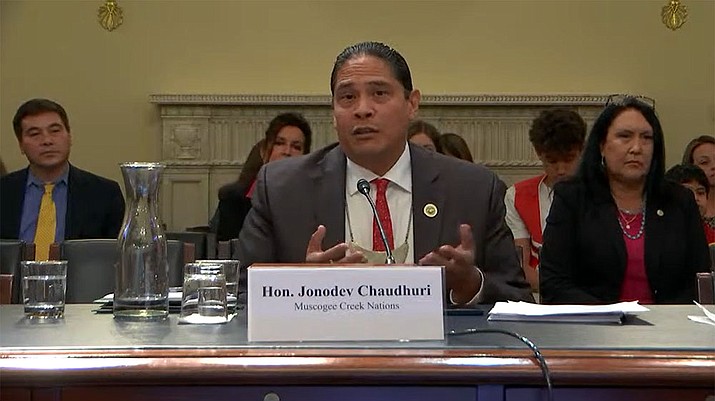 WASHINGTON — Indigenous leaders called on Congress Sept. 20 to reverse a Supreme Court ruling that expands states’ ability to prosecute crimes on tribal land, a ruling they said threatens their sovereignty and their ability to protect their citizens.

Witnesses told a House Natural Resources subcommittee that the Castro-Huerta ruling tramples on 200 years of legal precedent about tribal jurisdiction and has made it harder for them to pursue cases of domestic violence or missing and murdered Indigenous people, among other crimes.

But a handful of witnesses at the hearing defended the ruling that they said lets states take over criminal cases when tribal courts do not have the resources and federal courts are not interested.

“The consequences of this decision on victims of crime were immediate,” said Matthew J. Ballard, District Attorney for Oklahoma District 12.

He said that before the Castro-Huerta ruling, offices like his “stood nullified in our efforts to ensure the safety of our communities” while federal agencies “lack the resources, capacity, and, frankly, will to execute these functions.”

“In the midst of this chaos, the Castro-Huerta decision has been a beacon of hope for Native American victims of crime,” Ballard said in his written testimony.

Castro-Huerta was the second in a pair of Supreme Court rulings that upended the prosecution of cases in Oklahoma, but its impact is being felt in Indigenous communities across the country.

The dispute began in 2020, when the court considered the case of Jimcy McGirt, a Seminole who was convicted in Oklahoma state court of sexually assaulting an Indigenous child.

McGirt argued on appeal that 19th-century boundaries for the Muscogee reservation had never been changed, and that the land where he committed his crime was still tribal territory. The Supreme Court agreed and overturned his conviction, saying state courts are prohibited from prosecuting Native Americans for crimes committed against other Indigenous people on tribal land.

McGirt was quickly retried and reconvicted in federal court, but not before the ruling set off a wave of appeals, and reversals, in Oklahoma.

The state appealed dozens of those cases to the Supreme Court, which agreed to hear one: The case of Victor Manuel Castro-Huerta, a non-Native man who was convicted in an Oklahoma court of child malnourishment of his stepdaughter, a Cherokee, on the Cherokee Nation.

A sharply divided court ruled 5-4 in June that the state could prosecute non-Natives like Castro-Huerta, even if the crime was committed in Indian Country against a tribal member.

Justice Brett Kavanaugh, writing for the majority, said states should not have to get permission from the federal government to prosecute crimes that occur within their borders. But in his dissent, Justice Neil Gorsuch said the ruling would hand power back to states that have historically been the “deadliest enemies” of tribes.

Witnesses at the hearing said the ruling infringed on “inherent sovereign authority” of tribal governments and their right to self-determination.

Mary Kathryn Nagle, counsel for the National Women’s Indigenous Resource Center, said that by taking prosecution out of the hands of tribal officials, Castro-Huerta means that “our Native women and children will now have to rely on their state and local governments to protect them.” But those governments have not lived up to their obligations, she said.

“I wish I could say that state and local governments have prioritized the protection of Native women and children, but they have not,” Nagle said.

She said that lackluster state response has led to situations where “children and family members have to guard the crime scene until state law enforcement finally arrives,” she said. “Native children are the first responders.”

Jonodev Chaudhuri, ambassador for the Muscogee (Creek) Nation, agreed that state and federal officials do not prioritize prosecutions on tribal lands. But he said that solution is to give authority, and resources to Indigenous courts, rather than handing some of that authority over to the state.

“There’s this whole … talking point that you hear get recycled by the state, time and time again, chaos ran rampant because of McGirt. And because of that, we need to, you know, to reduce tribal jurisdiction,” Chaudhuri said. “That is faulty logic"

“There’s unfortunately, just an abundance of evidence … that crimes in Indian Country have historically gone unpunished when state resources are put to the test,” he said. “And the points made regarding the impacts on the missing and murdered Indigenous peoples crisis highlights the need for tribes to be empowered to protect citizens within their communities — Native or not.”