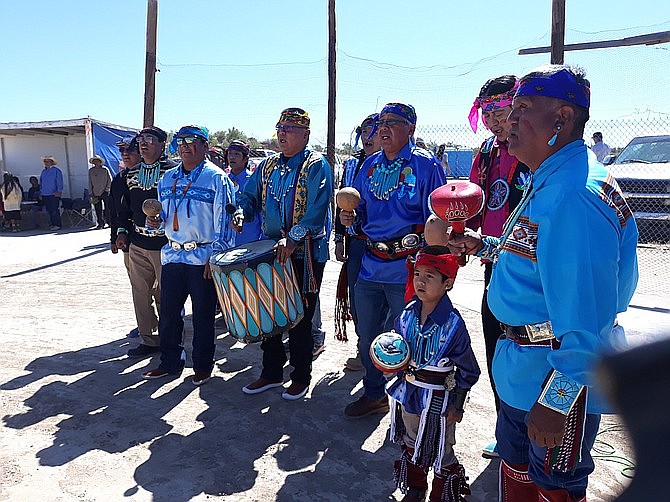 A social dance group from Zuni Pueblo, New Mexico prepares to dance at a prior event. (Photos/DHD Productions)

This is an open letter to the Hopi/Tewa people, as well as all the Hopi and non-Hopi vendors that registered for this year’s Sumi’nungwa Hopi Festival, and all the volunteers and supporters that stepped up or showed interest in being a part of the Festival.

As you may be aware, this year’s festival was not approved and was cancelled by the traditional leaders of First Mesa village. The non-approval by the leaders cited the presence of COVID-19, and that the First Mesa area has the highest rates of positive cases in comparison to all the other Hopi villages. The abrupt stoppage, nearly three weeks away from the festival has hurt us all and left us heartbroken as the sponsors. Despite the disappointment, out of respect for our traditional leaders, we have come to terms and have accepted their decision. To second guess, question or to argue with a traditional Mongwii has a price / consequence, and I love and care for my family.

It’s been four days since the letter was delivered to our home. Just like anything else, the news of the cancellation spread like wildfire via Facebook and other media outlets. Several phone calls were made to our home, questioning the validity of the cancellation. Many people are upset and disappointed, especially those artisans who have worked day and night on their arts and crafts to sell at the festival. Many of them depend on the sales of their crafts to put food on the table. Same goes for the food vendors. As sponsors, we feel for those individuals, and we hope that they will not get discouraged and join us next year. To counter the decision by the leaders, several people have suggested that we move the festival to another location, away from the First Mesa area for this year. Although those suggestions were very much appreciated, we felt that for the best interest of all, including ourselves as sponsors of the festival we will abide by the decision of the leaders and not complicate things further.

On a more positive note, in the letter from the Kikmongwi, it states that his decision is not a final disapproval of the Sumi’nungwa Harvest Festival, but to consider next year when the virus hopefully will be permanently be dissolved from our lands. For the record, the name of the festival that our family sponsors is not the Sumi’nungwa Harvest Festival. That was the name of the festival that originated on First Mesa years ago by the late Grover Ovah and family. In 2018, my family revived the festival after its nonexistence for several years, and named it Sumi’nungwa Hopi Festival and held it at the softball field, the same location where it was held in 2019, and the same location where it was scheduled to take place this year. Furthermore, it was with the acknowledgement and support of Grover’s daughter, Carol that we were able to sponsor the inaugural Sumi’nungwa Hopi Festival in 2018. We are grateful and appreciate the continued support of the Ovah family.

In our Hopi Culture and traditions, we all realize the hard work that comes with preparing and sponsoring a huge event such as a Hopi traditional wedding, baby naming, engagements, ceremonial dances and so forth. It takes financial obligations these days, in addition to hard labor to sponsor events, and the Sumi’nungwa Hopi Festival is no different. We have committed ourselves to continue our efforts of bringing people from all walks of life together in the form of “Sumi’nungwa” — bringing people together as one, “Nami’nungwa” — Supporting one another, and finally, “Hita’nungwa” — Taking the initiative to do something without being told. These are some of our Hopi values that have been instilled in us, therefore we try to preach and practice it to sustain our Hopi way of life.

We’ve hit a bump on the road. However, the positive encouragements and gratitude’s that we have received from many people has been uplifting. We appreciate everyone’s continued support. A heartfelt appreciation also goes to those individuals who are non-Hopi. Your prayers and moral support has been taken into heart.

Enclosing, life is too short to dwell on things that are beyond our control. There are things out there way bigger than us, and life itself is precious. I humbly remain. Thank you. Kwa Kwaii.

I want to acknowledge all the Hopi and non-Hopi social dance groups that registered to perform. We hope to see you all in 2023.