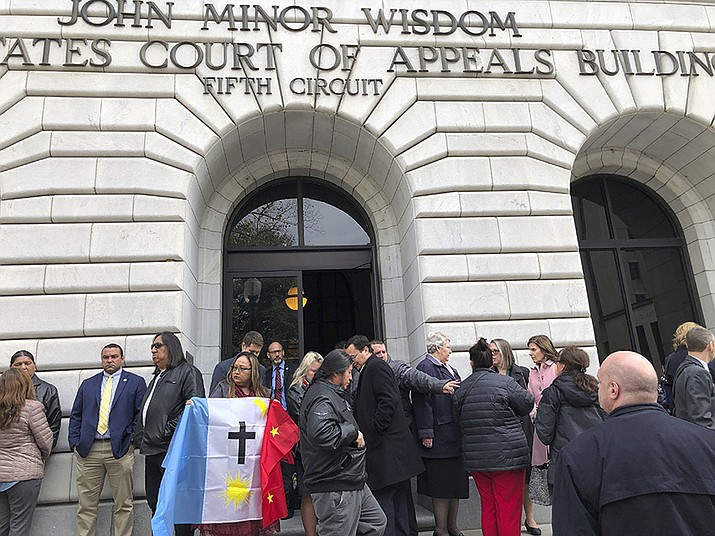 Rosa Soto Alvarez, of Tucson,, holds a flag of the Pascua Yaqui Tribe as she and other Native Americans stand outside the federal appeals court in New Orleans Jan. 22, 2020. Parts of a federal law giving Native American families preference in the adoption of Native American children were effectively struck down April 6, 2021 by a sharply divided federal appeals court, a defeat for Tribal leaders who said the 1978 law was important to protecting their families and culture. (AP Photo/Kevin McGill)

FLAGSTAFF, Ariz. — When the U.S. Supreme Court hears oral arguments Nov. 9, 2022 on an Indian Child Welfare Act case, Brackeen versus Haaland, its decision will decide the constitutionality of the act, which has been in place since 1978.

In February 2022, the U.S. Supreme Court announced it would hear a challenge to ICWA.

Texas, Indiana, Louisiana and other plaintiffs argued that ICWA is unconstitutional saying the act violates provisions of the Fifth Amendment that deal with equal protection and the Tenth Amendment’s prohibitions on issuing direct orders to states. The act says that Tribes are given the authority to decide adoption placement of Native children and states must comply.

While the appeals court ruled in April 2021 that Congress had authority to enact the law and that ICWA did not violate equal protections because it is not a race-based calculation, the Court of Appeals for the Fifth Circuit ruled that provisions of the act violate the 10th amendment because it “imposes” duties on the states, according to Scotusblog, a blog devoted to covering the U.S. Supreme Court comprehensively.

The U.S. government originally enacted ICWA in 1978 because of the large number of Native American children public and private agencies removed from their homes.

“Some who fiercely assert the evils of ICWA contend that all children should be treated equally and, therefore, ICWA should be dismantled,” said Terry Cross, former executive director of the National Indian Child Welfare Association (NICWA), in 2013. “This argument sounds reasonable to those unfamiliar with the long history that led to ICWA’s passage. At that time 20-30 percent of all American Indian children were removed from their homes…80 percent were placed, often permanently, in white homes.”

On Aug. 19, the National Council of Urban Indian Health, and five urban Indian organizations signed on to the National Indigenous Women’s Resource Center’s amicus brief to the Supreme Court in support of the constitutionality of the act, according to Indian Country Today.

An amicus brief, commonly known as ‘friend of the court’ is filed on behalf of an entity who is not one of the main parties in a case.

“These supporters recognize that ICWA is firmly in the best interests of Native children,” said a NICWA press release. “In keeping them connected to their extended family and cultural identity, the positive outcomes are far-reaching and include higher self-esteem and academic achievement. Further, they recognize that collaboration between sovereign Tribal nations and state child welfare systems is effective and just governance.”

University of Kansas professor Sarah Deer, filed an amicus brief with the court, with attorneys Mary Kathryn Nagle and Shoney Blake on behalf of two women who were adopted by white families, pre-ICWA, and struggled throughout their lives to reconnect with their tribal nations.

Deer works at the University of Kansas in the Department of Women, Gender and Sexuality Studies and the Public Affairs and Administration. She is also a MacArthur fellow and an inductee into the National Women’s Hall of Fame and is credited for her role in the 2013 reauthorization of the Violence Against Women Act.

In that case, a Cherokee father was ultimately ordered by the Supreme Court to turn over his biological daughter to a couple who sought to adopt her after the court decided that ICWA played no role in the case.

“There is more at stake in this case, however, because one of the questions to be resolved is whether ICWA is constitutional at all,” Deer said. “In other words, the Supreme Court could overturn ICWA.”

While people assume the purpose of ICWA is to take Native children away from white foster or adoptive parents, Deer said that typically happens only if ICWA is not followed from the beginning and/or is deliberately ignored.

“Native children in state court deserve to have their Nation involved in any long-term decisions about custody arrangements,” she said. “And ICWA is considered ‘gold-standard’ by numerous child advocacy groups, who appreciate the value of connecting Native children with their heritage and citizenship.”

Deer said the current numbers and make-up of the court make her worry what the outcome of the ruling may be.

“I’m trying to stay optimistic, but this particular court seems somewhat hostile to tribal nations,” Deer said. “In addition, Justice Roberts and Justice Coney Barrett are adoptive parents [of non-Native children]. As such, they may bristle at any argument that questions the value of adopting children outside the tribal nation. [Justice] Clarence Thomas also has a history of suggesting — in dissents — that all Indian law is potentially unconstitutional.”

Oral arguments are to take place Nov. 9. The Supreme Court will issue a decision by June 30, 2023.