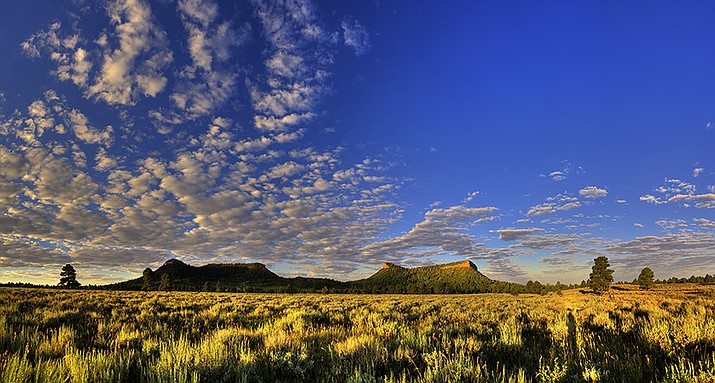 BEARS EARS, Utah. — Sounds and vibration give life and disrupt it.

Take a walk in any city park, and you’ll notice many wearing headphones to cancel out the noise that interjects modern urban existence. A walk in the bosque is only as serene as the distance between overpasses. Portable speakers are now common on hiking trails, furthering the disconnect from a true natural soundscape.

This is why the Bears Ears Inter-Tribal Coalition outlined protections for the pristine sounds nature creates, showing how the sonic environment is connected to the five tribes’ culture and their very existence.

The land management plan from the coalition was released for public review last week. It contains a history lesson on why Bears Ears National Monument is tied to cultural identity practiced for thousands of years and still to this day by the people from Hopi, Zuni, Navajo, Ute and Ute Mountain tribes.

This is the first proposal to be released since President Joe Biden issued a proclamation last October that preserves more than 1.36 million acres in southwest Utah. The directive in place today comes from when President Trump reduced Bears Ears. So the federal government must authorize a new land management plan by March 2024.

The five tribes heard this and got to work. They fought for years to get their say, and now the collaborative approach between the federal government and tribes on how to steward Bears Ears can include tribal ancestral history and ideas for protections through land conservation and traditional education.

The goal is to build a true collaborative land management team, according to the report from the coalition. This means hiring staff from the five tribes and ensuring tribal voices remain a priority in decisions going forward. Within four years, the group wants to see the creation of a traditional knowledge institute that shares insight from each tribe and remains a hub for the tribes to learn and teach their cultural connection to Bears Ears.

“When I visit Bears Ears, I am visiting the ancestors. I leave an offering, and I reconnect back to my ancestors,” said Octavius Seowtewa (Zuni). “This whole area is sacred to us — from a petroglyph to a site, from a spring to a viewshed, from the smallest rock to the mountains, they talk, they speak with us.”

Which brings us back to noise.

The coalition’s plan calls for the creation of an auditory department that can not only protect areas that have been untouched for decades but act as a voice when fighting for strict rules on recreation and mineral extraction.

Hopi consider winter time to be, “the quiet season” and will even adjust their wood gathering locations to reduce noise in their villages.

All five tribes in the coalition consider Bears Ears “to be a spiritual place and thus value the need for peace and quiet.”

Protections for sites and structures designated for traditional practices will be designed in compliance with federal regulations that protect Native American cultural heritage, the report states.

Although there are no active oil and gas wells within Bears Ears National Monument today, there are still more than 200 inactive wells. The five tribes are concerned that any further extraction would cause harm to the air quality, and that “the sound and vibrations caused by oil and gas pumping or fracking will harm all life forms and diminish other aspects of the natural environment and ecosystems.”

The report states that uranium is abundant in Bears Ears and the region around it, calculating more than 2,500 square kilometers of potential uranium sites within the national monument. Tribes are not only apprehensive about how uranium mining would impact the areas within the monument but also the community impacts that have already caused cancers and harm to plants and wildlife in their communities.

“The Ute Mountain Ute Tribe’s neighboring White Mesa community is especially concerned about its groundwater resources and the contamination of air quality with the transport and dusting of uranium ore using monument roads,” the report states.

Lastly, the tribes want to take a responsible approach to recreation within the national monument. They argue that people create new roads and trails that cause damage to ancestral sites. Water resources are misused or polluted. “Music, talking, yelling, driving, and human presence will have impacts on the soundscape and viewshed,” the report states.

This does go against President Biden’s order that says Bears Ears is abundant with new outdoor recreational opportunities, but the tribes argue that climbing and camping sites that already exist in the monument are causing problems such as, “damage to ancestral sites, vandalism, and pollution to the environment by trash and human waste.”

They say ATVs are not only loud, drivers make new trails and can better access sites that should be left undisturbed and offer a remoteness that can lead to people stealing ancestral items.

The land management plan strengthens the connection for tribal people and the natural environment, according to Hank Stevens (Dinè) representative for the Navajo Nation.

“Our culture relies on accessibility to the Bears Ears region,” he said. “What we are looking at is reconnecting with our Aboriginal lands and finding ways to incorporate our worldview into the management of our homelands. Having a say in how this region is managed brings us closer to our ancestors.”

This story is used with permission from Source New Mexico and can be found here.