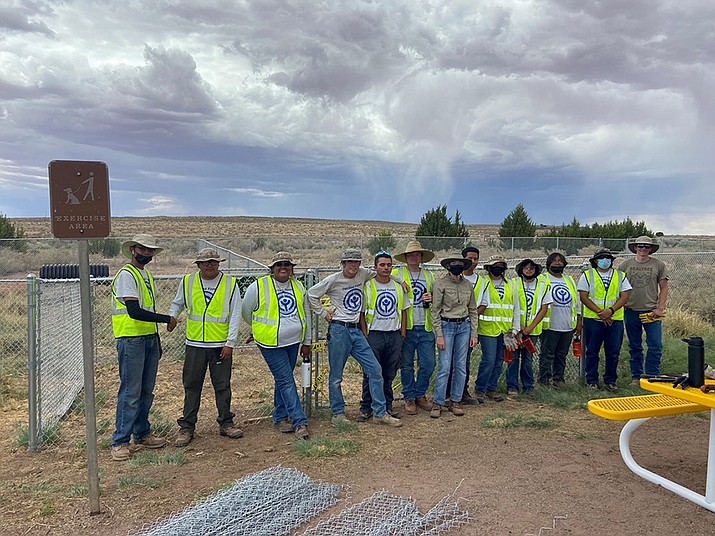 PETRIFIED FOREST NATIONAL PARK, Ariz. — Visitors to Petrified Forest National Park now have a new place to exercise their pets after a long day in the car.

It was built with the help of Petrified Forest maintenance staff, Youth Conservation Corps (YCC) participants and a local Girl Scout member. The Petrified Fur-Rest Bark Park features two areas, one for big dogs and one for small dogs, benches for their humans, shade, a tunnel and even an out of commission fire hydrant.

The idea for the project came from Park Manager, Jeannine McElveen.

“We get so many visitors traveling along Interstate 40 with their dogs,” she said. “I kept seeing people walking their dogs in the area where the dog park is now located. It just seemed like a great place to build something fenced where dogs can safely be off leash”

Soon after the idea was hatched, local Girl Scout, Elizabeth Parker wanted to get involved, resulting in her earning the Girl Scout Gold Award.

“I worked for two summers at Petrified Forest with the YCC crew,” she said. “When I heard the park manager was considering creating a dog park, I immediately went to talk with her and came up with a plan for my Gold Award Project.”

The Gold Award is the highest award in girl scouting and awarded to fewer than 6 percent of Girl Scouts annually.

“I’ve grown up going to National Parks,” she said. “My family has visited many of the national parks over the years and my brother and I have the national park passport stamps to prove it.”

She said her family has spent a lot of hours in the car on family road trips, and during their last big road trip, brought their dog along and spent a lot of time looking for places to stop and give him exercise.

“Since that trip I started thinking about the fact that I live in a town along Interstate 40, the third-longest interstate highway in the country, and there must be a lot of families traveling through with the same need for their furry family members,” she said. “Petrified Forest being the closest national park to my hometown, it seemed to be the perfect location”

Elizabeth had limited equipment and resources when she began the project.

“Dog park equipment is expensive, so I made arrangements with the park’s maintenance department to visit the ‘boneyard’, an area where the park stores old equipment and building materials,” she said. “I found lots of good things we were able to use for the dog park, including benches, an old piece of culvert now used as a tunnel, old tires, large rocks for climbing and an out of service fire hydrant."

She said she also purchased signs for the dog park along with stepping paws for the small dog park using proceeds from her cookie and fall product sales over the past few years.

“I also received a donation from the Holbrook Kiwanis Club and I sold dog advent calendars last year to help raise funds,” she said.

Visiting dogs and their humans seem to be enjoying the bark park, which is the only official dog park inside a national park. Plans for some shade structures and more wheelchair accessible areas are also in the works.