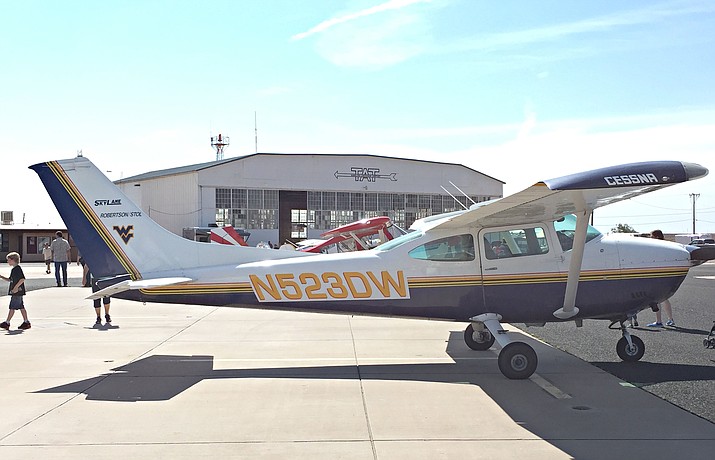 A plane outside the Winslow-Lindbergh Regional Airport’s historic hangar during the 2016 Fly-In. Submitted photo

The event will be Sept. 17 from 8 a.m. to noon, and will feature airplanes, history, food and more.

There will be a cowboy breakfast hosted by the Winslow Rotary Club from 8 a.m. to 10 a.m. for $6 per person, while young visitors can take complimentary flights on a first-come, first-served basis from 8 a.m. to 11 a.m. A waiver is required.

Attendees will be allowed on the tarmac to view visiting aircraft. Inside the hangar, the Flying Fun Kids Area will feature hands-on activities. The Flying Through History Area includes historical exhibits and artifacts related to aviation in the Southwest.

Attendees are encouraged to bring donations of pet food to the event for donation to the shelter.

The Winslow-Lindbergh Regional Airport is located at 701 Airport Road in Winslow.

The High Desert Fly-In Committee is a nonprofit partnership that works throughout the year to plan this exciting annual event. The High Desert Fly-In limited edition polo shirts will be available at the Fly-In and are currently available at the Old Trails Museum. The cost is $20 (on sale from $30), and the proceeds support the free, nonprofit event.

For many years the airport was the only all-weather airport between Albuquerque, New Mexico, and Los Angeles. The United States Army Air Forces Air Transport Command used the airport during World War II to refuel and repair planes.