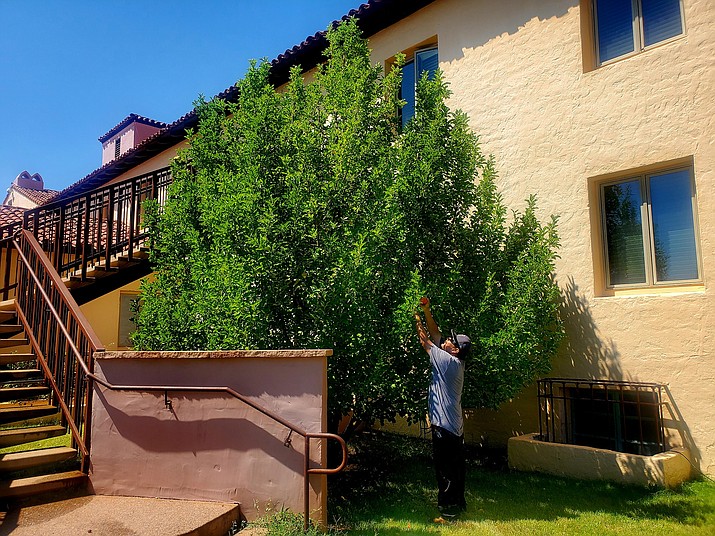 WINSLOW, Ariz. — The gardeners at La Posada in Winslow have been busy harvesting fruits and vegetables from the property’s gardens.

“This morning at Las Posada, our wonderful gardeners harvested rosemary, mint, tomatoes and over 40 pounds of apples from the various gardens on the property and had delivered them to the Turquoise Room,” the hotel said in Facebook post.

The hotel said they use the homegrown produce in their restaurant for items such as the Southwest Cobb salad, Fred Harvey pie and their coconut mojito.

The hotel said Mary Colter’s original 1930 design for the property included plans for not only the hotel building but also for 12 acres of gardens based on sustainable desert plant communities.

“Unfortunately, these plans were never implemented because the Santa Fe Railway faced major budgetary constraints in the years following the Great Depression,” they said. “By the 1980s, La Posada’s gardens had fallen into total disrepair.”

The owners started restoring La Posada in 1997 and the gardens have been under continuous improvement since then.

La Posada embodies the visions of both Mary Elizabeth Jane Colter, the hotel’s renowned architect, and Allan Affeldt, its current owner. But the story really begins with Fred Harvey, who forever changed the railroad experience for travelers.

In the 1920s, Harvey decided to build a major hotel in the center of northern Arizona. “La Posada”—the Resting Place—was to be the finest in the Southwest. Construction costs alone exceeded $1 million in 1929. Total budget with grounds and furnishings was rumored at $2 million (about $40 million in today’s dollars). They chose Winslow, then (as now) the Arizona headquarters for the Santa Fe Railway. They asked Colter to design the new hotel.

Colter worked for the Fred Harvey Company from 1905 until her retirement in the 1950s. Although famous for her magnificent buildings at the Grand Canyon, she considered La Posada her masterpiece. Here she was able to design or select everything from the structures to the landscape, furniture, maids’ costumes, and dinner china.

La Posada opened May 15, 1930, just after the stock market crash of 1929, and remained open for just 27 years. In 1957, the hotel closed to the public. The museum-quality furnishings were auctioned off in 1959. In the early 1960s, much of the building was gutted and transformed into offices for the Santa Fe Railway. Several times over the ensuing 40 years, the building was nearly demolished, as recently as 1994 when the railway announced its plans to move out for good.

The National Trust for Historic Preservation found out about La Posada’s peril and added it to their endangered list — where it came to the attention of Allan Affeldt. However, La Posada was never for sale. Affeldt purchased it from the Santa Fe Railway after learning that the property was in danger. He visited the hotel in 1994 and decided to help local preservationists save it. This daunting task entailed negotiating for three years with the railroad and resolving various legal, environmental, and financial obstacles. He established La Posada LLC to take on the enormous risk and complexity of the estimated $12 million restoration. Affeldt and his wife Tina Mion moved in April 1, 1997. Daniel Lutzick became the third partner and General Manager.

Allan oversees the overall rehabilitation—design, architecture, financing, and planning. Tina, a renowned artist, paints in her studio upstairs; her art is now an integral part of La Posada experience. Dan, a sculptor, maintains day-to-day operations of the hotel as general manager and coordinates exhibits and events. The president of the Winslow Arts Trust, he operates Snowdrift Art Space down the street at 108 West 2nd.

History of the hotel is from the La Posada website.