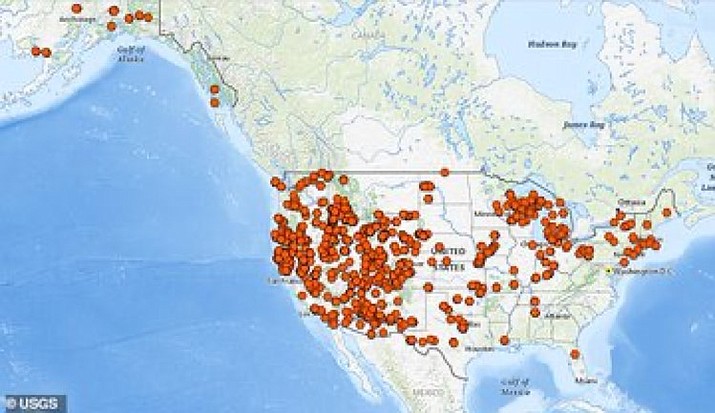 New names for nearly 650 places bearing the offensive word “squaw” include the mundane (Echo Peak, Texas), peculiar (No Name Island, Maine) and Indigenous terms (Nammi’I Naokwaide, Idaho) whose meaning at a glance will elude those unfamiliar with Native languages. (Map/USGS)

CHEYENNE, Wyo. — The U.S. government has joined a ski resort and others that have quit using a racist term for a Native American woman by renaming hundreds of peaks, lakes, streams and other geographical features on federal lands in the West and elsewhere.

New names for nearly 650 places bearing the offensive word “squaw” include the mundane (Echo Peak, Texas), peculiar (No Name Island, Maine) and Indigenous terms (Nammi’I Naokwaide, Idaho) whose meaning at a glance will elude those unfamiliar with Native languages.

“I feel a deep obligation to use my platform to ensure that our public lands and waters are accessible and welcoming. That starts with removing racist and derogatory names that have graced federal locations for far too long,” Interior Secretary Deb Haaland said in a statement.

The changes announced Sept. 8 capped an almost yearlong process that began after Haaland, the first Native American to lead a Cabinet agency, took office in 2021. Haaland is from Laguna Pueblo in New Mexico.

“Federal lands should be welcoming spaces for all citizens,” deputy director Matthew Campbell said in a statement. “It is well past time for derogatory names to be removed and tribes to be included in the conversation.”

Haaland in November declared the term derogatory and ordered members of the Board on Geographic Names, the Interior Department panel that oversees uniform naming of places in the U.S., and others to come up with alternatives.

Haaland meanwhile created a panel that will take suggestions from the public on changing other places named with derogatory terms.

Other places renamed include Colorado’s Mestaa’ėhehe (pronounced “mess-taw-HAY”) Pass near Mestaa’ėhehe Mountain about 30 miles (48 kilometers) west of Denver. The new name honors an influential translator, Owl Woman, who mediated between Native Americans and white traders and soldiers in what is now southern Colorado.

The Board on Geographic Names approved changing the mountain’s name in December.

While the offensive term in question, identified as “sq___” by the Interior Department Sept. 8, has met wide scorn in the U.S. only somewhat recently, changing place names in response to broadening opposition to racism has long precedent.

The private sector in some cases has taken the lead in changing the offensive term for Native women. Last year, a California ski resort changed its name to Palisades Tahoe.

A Maine ski area also committed in 2021 to changing its name, two decades after that state removed the slur from names of communities and landmarks, though it has yet to do so.

The term originated in the Algonquin language and may have once simply meant “woman.” But over time, the word morphed into a misogynist and racist term to disparage Indigenous women, experts say.

Democratic Gov. Gavin Newsom has until the end of September to decide whether to sign the bill into law.