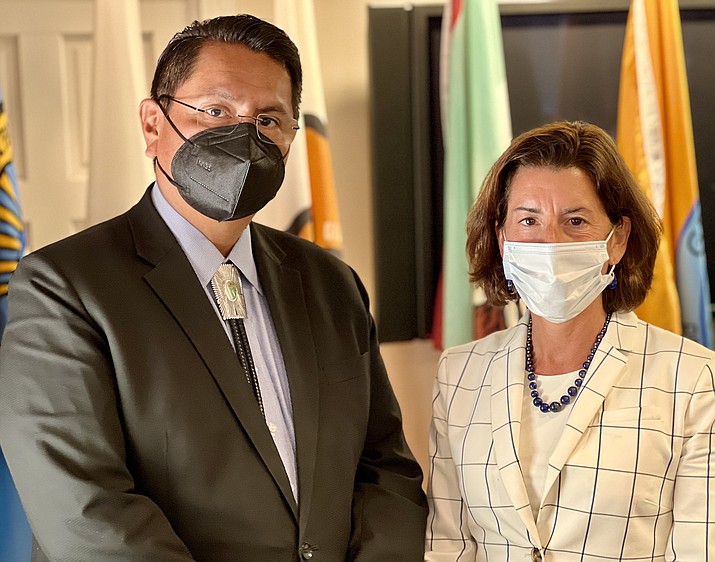 PHOENIX — On Aug. 30, the Biden-Harris administration announced a $50 million grant award to fund high-speed internet infrastructure on the Navajo Nation.

With the announcement, each of the 63 broadband infrastructure projects have been fully funded.

“We have a seat at the table with the Biden-Harris Administration. Through our discussions with President Biden, Secretary Raimondo, and NTIA, we were successful in demonstrating the need for increased broadband connectivity to support our students, first responders, businesses and families,” Nez said. “This funding will help the Navajo Nation to build on the success that we’ve had with expanding broadband through the CARES Act and the recently approved American Rescue Plan Act funds. We are building a stronger Nation for future generations.”

According to NTIA, the awards are part of the Biden Administration’s commitment to nation-to-nation engagement and an effort to connect everyone in America, including American Indians and Natives, with affordable, reliable, high-speed internet.

The Tribal Broadband Connectivity Program is a nearly $3 billion grant program and part of the Biden-Harris Administration’s Internet for All Initiative. The awards announced were part of nearly $1 billion made available in the Consolidated Appropriations Act, 2021.

Among the improvements, the $50 million will fund 11 new telecommunications towers, 204 miles of new fiber and installations, wireless broadband equipment, new LTE carriers and expansion, backbone upgrades and increase or connect high-speed internet to over 27,000 homes on the Navajo Nation.

“This month the Biden-Harris Administration demonstrated that Tribal communities will not be left behind in connecting their communities to affordable and reliable high-speed internet,” Raimondo said. “Direct investment into Tribal communities is a crucial step in closing the digital divide in Indian country while protecting local customs and traditions and creating new opportunities for global engagement and growth.”

In addition, through the American Rescue Plan Act, Nez and the Navajo Nation Council approved $120 million for broadband development in July.