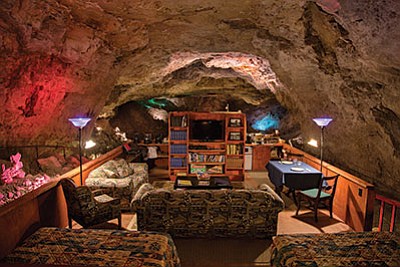 The Cavern Suite located inside the cavern, sleeps up to six people comfortably. Ryan Williams/WGCN

A husband and wife, a couple with two young children and at least two people in their 70s had taken a 30-minute tour of the Grand Canyon Caverns on Sunday and were preparing to return aboveground when they discovered that the lift was not working, Coconino County Sheriff's officials said in a news release.

A man in the group was able to get out and notify authorities after climbing the emergency staircase to the surface, the release said. Authorities determined that the five other members of the group could stay overnight in the hotel suite located at the bottom of the cavern while repair personnel worked on the elevator.

Notified on Monday morning that the repair was unsuccessful, the sheriff's search and rescue unit and the Flagstaff Fire Department's technical rescue team set up a rope rescue system in the elevator shaft. Using the emergency stairs, they walked to the bottom, secured each of the tourists in a harness and raised them one at a time up the shaft.

The rescue was completed by 6 p.m. Monday and no injuries were reported, the sheriff's office said.

"I can't say thank you enough because they did everything so professionally, so safe," Sherry Jimenez told Phoenix TV station ABC15 after she was rescued.

The Grand Canyon Caverns is a tourist attraction 12 miles (19 kilometers) east of Peach Springs. Visitors can tour an ancient cave and stay in an underground hotel, according to the attraction's website.