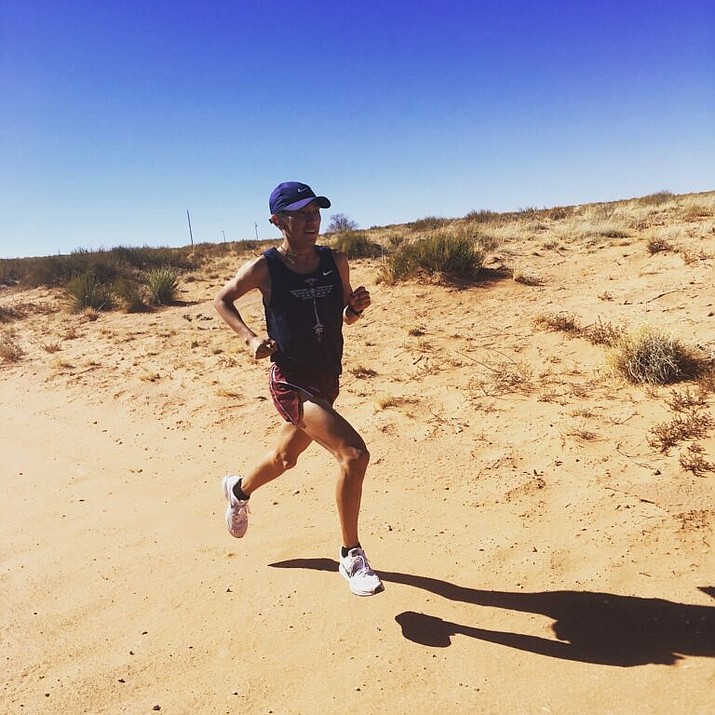 Santiago Hardy participates in the 2018 “Sacred Strides For Healing” prayer relay for Bears Ears on a section of the “Navajo Route” between Chinle and Rock Point, AZ (Photo/Wings of America)

ALBUQUERQUE, NM — Wings of America, a nonprofit organization has been focused on Native youth runners for decades, and now has started an elite team.

The Wings Elite Program for Native athletes is unique, and Patti Catalano Dillon has been tapped as the team’s head coach.

Former Wings National Team Member, Santiago Hardy (Diné) has been recruited as the first professional runner under the Wings Elite Program, establishing a first of its kind program for Native American sporting development.

“Decades ago, the dream was sown in my heart of seeing our Native heritage represented once again on Olympic teams,” comments Patti. “It is now beginning to take root in the Wings Elite Program. I am excited, and honored, to work with these young athletes and foster their ability to become world-class competitors and the standard bearers of our cultures for the future."

In May of 2021, Wings of America purchased a unique building near the mouth of Tijeras Canyon. Apart from serving as an office for program staff, the lodge-like structure held potential to become a comfortable home for elite-level runners in a city known for honing endurance athletes. After nearly 35-years of sponsoring the fastest “prep” students from Tribal communities across the United States, the organization is now ready to nurture the dreams of promising Native runners ready to turn pro.

“Native runners have to look too far in the past for examples of world champions like Patti and Billy Mills. Despite having strong cultural ties to running, our communities haven’t been able to produce many other globally relevant runners because of limited resources,” says Wings Executive Director Dustin Martin. “We have taken a big first step toward rectifying that lack of investment with hope that it will elevate the sport in our communities and celebrate role models that pass their light to others.”

Although Patti was more eager than anyone to get the project started, runners under her direction can expect long, controlled “build ups” as they prepare their body, mind and spirit to go stride for stride with the best in the world.

“Running under the care of Wings after college was an opportunity that seemed too good to be true- but now it’s here and I’m committed to the process”, states Santiago. “It is refreshing to have a female coach, and I appreciate the way Patti is challenging me to gradually adjust the way I approach life every day to become the best I can be.”

Wings of America is working to sponsor more promising runners soon. But Elite Team hopefuls will also need to meet or better standards informed by the impressive performances of Native American harriers at colleges and world- qualifying events over the last four decades.

“Although the organization created this opportunity to increase representation of Native competitors at the highest levels of running, we recognize and appreciate those that had to tow that line without our support,” says Dustin Martin. “We want to call them in to support the next generation and share their experiences to help others navigate the sometimes-treacherous waters of elite running.”

For more information about Wings of America and the National Team, please contact the organization’s Executive Director, Dustin Martin, by phone at (505) 977- 5057 or email at dustin@wingsofamerica.org.