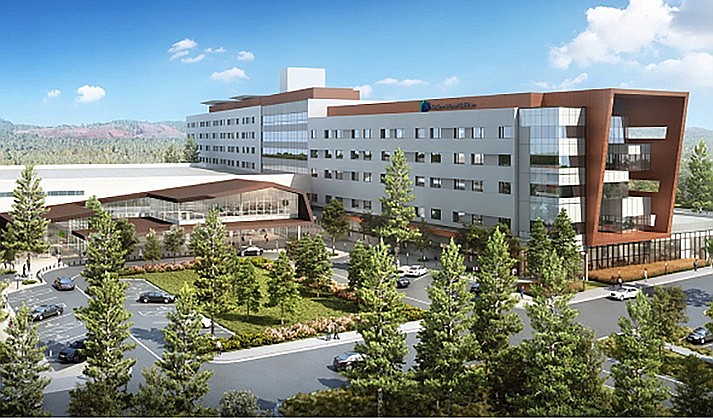 FLAGSTAFF, Ariz. — A large hospital complex planned for Flagstaff has Verde Valley residents worried it will redirect funds Northern Arizona Healthcare has promised to invest in Yavapai County. The people of Flagstaff, however, have different concerns.

The latest community meeting of the NAH leadership with Flagstaff residents drew more than 80 questions regarding the move of Flagstaff Medical Center from downtown to land north of Fort Tuthill County Park.

The need for a larger facility was not questioned. Traffic, noise and location, on the other hand, continue to be a concern.

Flagstaff Medical Center has been on Beaver Street on Flagstaff’s north side since 1936. Now, NAH officials say the area is too small to accommodate the demands on it as a regional medical center. The size of the campus and buildings have limited the services offered, and the size of the patient rooms no longer meet industry standards, they say.

We have nowhere to grow,” said Steve Eiss, vice president of construction and real estate development at Northern Arizona Healthcare.

The selected site is on the south end of Flagstaff, west of Interstate 17 and Beulah Boulevard. It shares a border with Fort Tuthill but is within the city limits.

Design plans are expected to go before the Flagstaff Planning and Zoning Commission before the end of the year. If the city approves the plans and permits over the course of the next several months, the new campus could be completed by 2027.

Interim CEO Josh Tinkle said if FMC served only Flagstaff, which has a population of 74,000, the plans would be too large. However, 60 percent of FMC’s patients come from beyond city limits. That includes surrounding counties, like Yavapai, much of the Navajo Nation, travelers on I-17 and Interstate 40, and the heavy tourism areas like the Grand Canyon and Red Rock country.

“That is solely due to the fact we did not have room for these patients,” he said.

The plans include a hospital tower of 160 feet, including a partially below-grade floor. While neighbors were concerned that would ruin the natural landscape of the area, Tinkle said the pines that would be maintained from the entrance off Beulah would obscure the building until motorists drive onto the campus.

Tinkle noted, too, the traffic and helicopter noise that exist around the current FMC will simply move to the new location. For those worried about air traffic safety over the area, which is not far from the Flagstaff airport, Tinkle said since a fatal crash of two medical helicopters in 2008, the medical helicopters have been under the guidance of the airport tower.

The new hospital campus plans go beyond just a hospital. They include multi-family housing, retail, restaurants, a hotel and a “22-acre natural retreat.” Eiss said the initial housing, up to 325 units, will be open to anyone but NAH would like to create employee housing.

All of that has left Fort Tuthill neighbors nonplussed by the size of the undertaking and how the development will transform the area into something incongruous with its natural setting.

Tinkle said the goal in the Verde Valley is to have patients continue to get their medical care close to home, with more specialist offerings.

Tinkle said NAH’s investment in the FMC project goes entirely to the medical portion of the plans. The company is leaning on partnering investors to make housing and retail a reality.

Meanwhile, NAH is trying to grow its number of providers throughout its system. Asked how they could possibly fill thousands more jobs created by the new complex when they can’t fill positions already available, Tinkle said he expects the job market to “normalize” by the time the new hospital is complete.