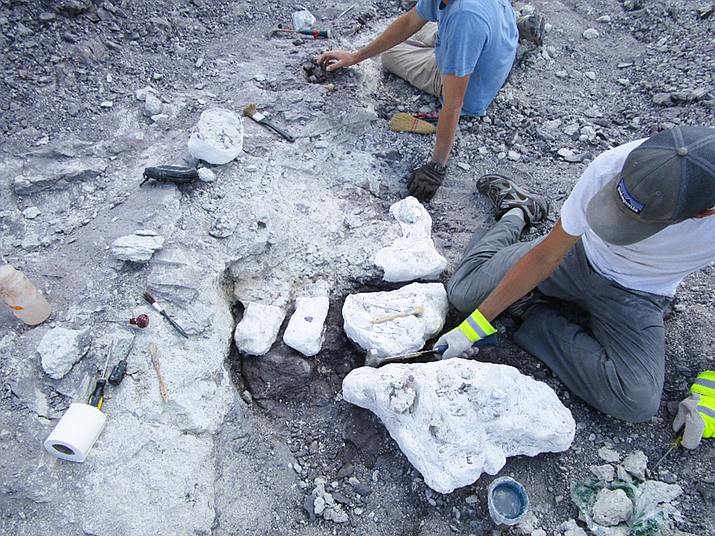 Paleontologists excavating fossils from the site in 2014. NPS (Photo/NPS)

PETRIFIED FOREST, Arizona — The paleontology program at Petrified Forest National Park is excited to announce the publication of a new peer-reviewed scientific article that names a new Triassic reptile from the park.

This reptile was first discovered by park paleontologists in 2014 during a guided Girl Scout hike in the Blue Mesa area. It belongs to a group of animals that at that time was thought to only be found in what is now Madagascar and Morocco, when those places were adjacent to modern-day Arizona on the supercontinent Pangea.

The new reptile is named Puercosuchus traverorum after the nearby Puerco River and honoring Brad and Denise Traver, the former PEFO Superintendent and his wife, who provided much support to the paleontology program at the park.

Puercosuchus is known from hundreds of fossil elements representing at least nine individual skeletons and is approximately 220 million years old. Representing a distant cousin of living birds and crocodiles, this reptile would have superficially resembled a living Komodo dragons in size and body shape. Its serrated and sharp teeth, like those of a Komodo dragon, would have made Puercosuchus a formidable predator. Although its fossils are found alongside those of early dinosaurs, Puercosuchus was not a dinosaur.


Open-access funds for the article were provided by the Petrified Forest Museum Association, and it can be freely downloaded at the Journal of Paleontology: https://www.doi.org/10.1017/jpa.2022.49