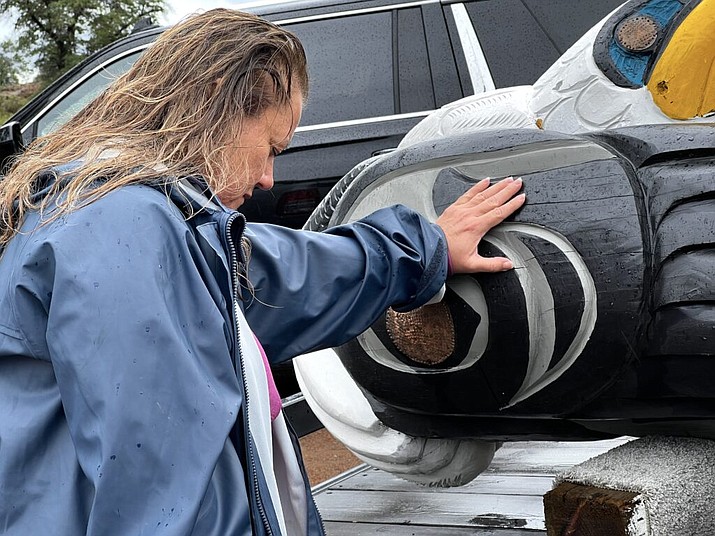 National Congress of American Indians President Fawn Sharp places her hand on the totem pole in prayer during a visit to the Oak Flat Campground on Oct. 16, 2022. (Photo/Shondiin Silversmith /Arizona Mirror)

Tribal nations have rich cultures and traditions that benefit their people, but they also have their own governments working to help their communities.

“The real strength and power of Indian Country is within our own nations,” said Fawn Sharp, the president of the National Congress of American Indians (NCAI), a non-profit organization that advocates for policies that serve tribal governments and their communities. “Tribal nations are strongest when we are unified and create our own bright path forward together.”

Tribal sovereignty is as important to Indigenous communities as their own unique ways of life. To raise awareness about sovereignty, the NCAI and non-profit organization Bright Path Strong is hosting the 2022 Sovereignty Run, inspired by legendary Olympic athlete Jim Thorpe. The first Indigenous athlete to win Olympic Gold, Thorpe’s name in the language of the Sac and Fox people was Wa-Tho-Huk — or “Bright Path” in English.

“The time to raise our voices — and collective awareness — is now,” Sharp, who is also vice president of the Quinault Indian Nation in Washington, said. “We are proud to dedicate this journey to fight for our sovereignty to the memory and legacy of Jim Thorpe, and we will carry Jim’s strength, tenacity, and courage with us every step of the way.”

“The Sovereignty Run celebrates his winning spirit, our resilience and perseverance as Native people, and helps show we are stronger when we work together,” Nedra Darling, a co-founder of Bright Path Strong. “Reviving the Run is a special way to remind the world, but most importantly, each other, that we are at our best when we work collectively on behalf of Native nations and Native people.”

Sharp will embark on a 1,785-mile journey from Oklahoma, where Thorpe was born, to California to unite tribal nations, partners, and allies to heighten awareness of tribal sovereignty on a national level and celebrate Thrope’s life.

During the Sovereignty Run, a 25-foot totem pole created by the House of Tears Carvers of Lumni Nation will travel alongside runners to symbolize honoring, uniting and empowering communities to protect sacred places, cultures, and tribal sovereignty.

“We’ve been under attack since contact, and it’s never going to end,” Sharp told the Mirror. “There’s no court, there’s no act of Congress that can separate us from who we are, and that really is the strength and power that we have as tribal nations.”

During a stop at the Inter Tribal Council of Arizona’s office in Phoenix, tribal leaders got to see the 25-foot totem pole created by the House of Tears Carvers of Lumni Nation traveling alongside the 2022 Sovereignty Run. Photo by Shondiin Silversmith | Arizona Mirror

The run started on Oct. 3 on the Cherokee Nation Reservation in Tahlequah, Okla., on the same day that the U.S. Supreme Court opened its current term.

“While they were opening their session, we were rallying the voice of Indian country in Oklahoma,” Sharp added. “We are in a critical time where, once again, our sovereignty is being threatened, and Jim Thorpe’s home state of Oklahoma is ground zero.”

The most recent push against tribal sovereignty comes from the U.S. Supreme Court decision earlier this year in the Castro-Huerta v. Oklahoma case.

In June, the U.S. Supreme Court overturned the long-held understanding that states do not have the authority to prosecute non-Natives who commit crimes against Native people on tribal land.

The 5-4 majority held that “the Federal Government and the State have concurrent jurisdiction to prosecute crimes committed by non-Indians against Indians in Indian country,” which strikes against tribal sovereignty and jurisdiction to protect tribal citizens, according to the Native American Rights Fund.

“In the past two years, the Five Tribes here in Oklahoma have been challenged on our treaty rights, rooted in law by those who are trying to chip away at tribes and our rights to self-govern,” Cherokee Nation Principal Chief Chuck Hoskin Jr. said in a press release.

“We have taken to the U.S. Supreme Court steps twice and been reaffirmed that our reservations have always existed, and yet presented with more legal challenges,” Hoskin added. “Our Tribal Nations are stronger today, and that we will never waiver when it comes to our sovereignty.”

Sharp organized the first Sovereignty Run in 2002. It began on the Quinault Reservation in Washington, spanned 12 states, and ended on the steps of the Supreme Court in Washington, D.C.

Sharp said they’re running across these states with all the prayers they’ve received along the way, and it’s a way of uniting the voice of Indian country.

Sharp said they invite anyone and everyone to join in their runs, even if people want to walk. “If you want to walk 50 yards for sovereignty, you’re welcome to,” she said.

The run has stops in Oklahoma, Texas, New Mexico, Arizona, and California. Its recent stop in Arizona was from Oct. 14 to Oct. 17. Sharp visited the Inter Tribal Council of Arizona to join local Tribal leaders in a conversation about the importance of the Native vote in this year’s midterm elections.

The run is concluding at the end of October, only a week before the election, and Sharp said the timing made it necessary to advocate for voting.

“We’re connecting with tribes on the ground,” Sharp said. “We’re finding that the common threat of attacks on tribal sovereignty really unifies us, and it resonates with every single stop.”

Following Sharp’s visit with the Inter Tribal Council of Arizona, she went to the Oak Flat Campground on Oct. 16 near Superior to talk with local advocates about the San Carlos Apache Tribe’s fight to preserve its sacred site.

On Monday, Sharp made her last stop in Arizona with the Colorado River Indian Tribes near the California border. Sharp visited with CRIT Chairwoman Amelia Flores and called out locals to see the totem pole before they continued their journey.

Sharp said she hopes the run will serve as an educational opportunity for people unfamiliar with Tribal sovereignty because it’s a simple concept.

“We just want to live as our creator intended on the land gifted to our ancestors when time began,” Sharp said. “It’s quite simple, and that’s the essence of sovereignty — the ability to freely determine our own futures without external interference.”

The Sovereignty Run will end in Sacramento, Calif., on Oct. 31 for the opening ceremonies of the 79th annual National Congress of American Indians Convention & Trade Show.

For more information about the Sovereignty Run and its events, visit www.sovereigntyrun.org.