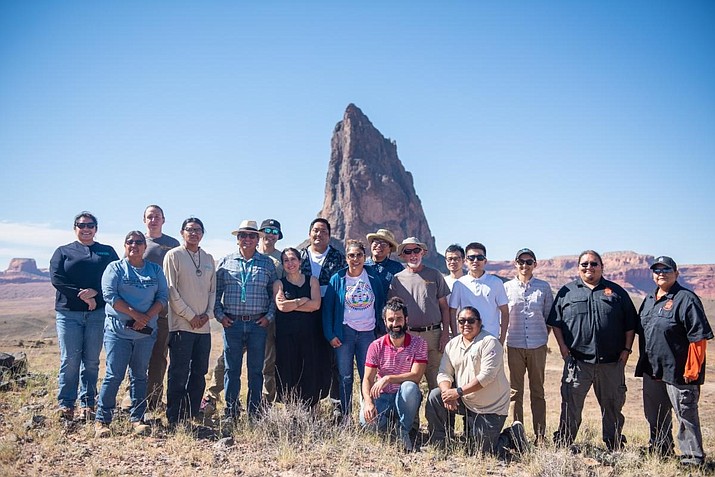 KAYENTA, Ariz. — On Oct. 14, Council Delegate Nathaniel Brown joined in the kick-off celebration for the Comb Ridge Project which will provide 25 homes in the Comb Ridge-El Capitan community with an autonomous source of electricity and broadband.

The Kayenta Chapter partnered with the Nááts’íilid Initiative, University of Utah, New Sun Road, Box Power and Native Renewables to secure a $1.2 million grant awarded by the U.S. Department of Energy to construct a solar-based micro-grid and battery energy storage for the Comb Ridge-El Capitan community.

The $1.2 million grant will be used to fund a portion of the $2.8 million project. The remaining amount will be covered by the Navajo Nation Síhasin Funds. In addition, the project will create five (5) trained jobs, six (6) temporary jobs, and three (3) long-term jobs for members of the Navajo Nation.

“As elected leaders of the Navajo Nation, our skills as Chapter officials, school board members and council delegates should include being professional fundraisers and grant writers in order to seek out funding opportunities for our local communities,” Brown said. “I would like to assure our people that Navajo leadership is seeking out other sources of funding, such as grants to complete projects across the Nation.”

In the coming weeks, the team will deploy various types of portable solar-powered integrated energy systems to power homes. The installed micro-grid will be capable of providing 24/7 uninterrupted power and internet for the community. Households will finally have access to online education, remote healthcare and increased security.

Field visits were conducted at each household to determine the design and mapping of each battery storage unit. One-on-one consultations were also conducted to locate the optimal space for the solar containers to maximize the solar energy captured.

Among those in attendance were family members of the 25 households, Kayenta Chapter officials, the University of Utah’s Engineering and Architecture team, Nááts’íilid Initiative staff and Native Renewables staff.

“With the success of this historic project, I am optimistic that it will serve as a model for other chapters to take charge in their communities,” Brown said.