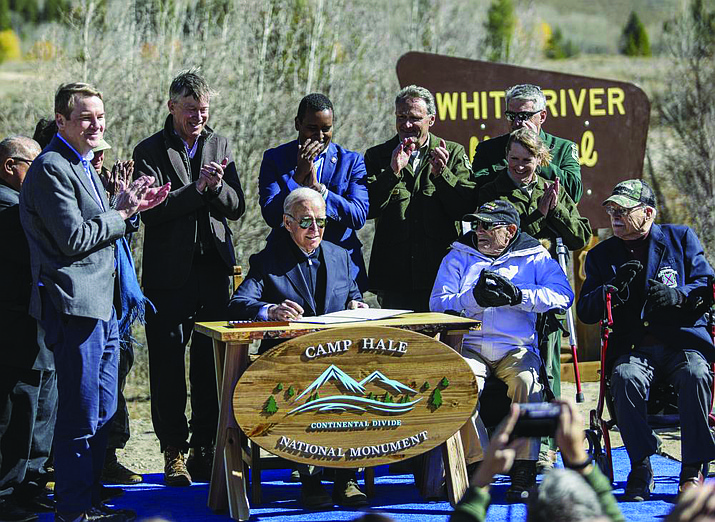 President Joe Biden signs a proclamation to designate the first national monument of his administration at Camp Hale, a World War II-era training site, the Camp Hale - Continental Divide National Monument, on Wednesday, Oct. 12, 2022, in Camp Hale, Colo. The monument is to honor the 10th Mountain Division soldiers who trained there to fight in Italy in World War II. (Chris Dillmann/Vail Daily via AP)

SALT LAKE CITY — A Utah-based Native American tribe that frequently has sparred with President Joe Biden criticized the White House again for not adequately consulting its leaders ahead of this week’s creation of a national monument on ancestral lands in Colorado.

The Ute Indian Tribe is one of three Ute tribes in the U.S. West that share ancestral ties but operate independently. Representatives from the other two in Colorado — the Southern Ute and Ute Mountain Ute — were on board with the plan and attended Wednesday’s ceremony with Biden but didn’t speak on stage.

Biden and others addressed the significance of the land to tribes at length, and the White House’s official proclamation included a mention of Ute burial sites in the area.

But the Ute Indian Tribe, which has nearly 3,000 members on lands in an area known for oil and gas operations in eastern Utah, claimed in a news release issued late Wednesday night that it wasn’t on board with the plan. Shaun Chapoose, chairman of the tribe’s Business Committee, which serves as its governing body, said Thursday that his tribe was only made aware that a new monument was under consideration a week ago in a phone call with the White House. He said his tribe asked for time to assess the idea and provide feedback. But a week later, the administration informed the tribe the monument would be created this week at a ceremony in Colorado. Chapoose said he was invited and went to Colorado but left early after he says he was made to feel like an afterthought, put on the final bus and never told where to go.

“What frustrated us is that they didn’t want us there to comment, they wanted us there for the photo opp,” Chapoose said. “I don’t expect them to roll out a red carpet, but I expect a little common courtesy. If I’m just going to be one of the Indians that you want to photograph, I’m the wrong Indian to call.”

The chairs of both Colorado tribes supported the designation in letters to Biden sent Oct. 7. The letters were sent by Manuel Heart, chairman of the Ute Mountain Ute Tribe, and Melvin J. Baker, chairman of the Southern Ute Indian Tribal Council.

Baker noted that for centuries, the Camp Hale area was home to Ute people and remains culturally important to the Utes.

“It has been said that what a country saves is what a country chooses to say about itself. By preserving these areas of cultural importance to the Ute people, you are reflecting the significance of Native people and tribal nations to the history and progress of this country,” Baker said.

Biden administration officials met with each Ute tribe in the development of the proclamation. A senior administration official said the tribes expressed support - not opposition - to the monument. The official was not authorized to speak publicly about private discussions and spoke to The Associated Press on condition of anonymity. And representatives from all three tribes were invited to Wednesday’s event.

“We appreciate the strong support tribal leaders expressed in preserving the sacred lands of Camp Hale as a national monument during our conversations with them prior to the designation, and look forward to continuing that engagement with tribal leaders,” said White House spokesman Abdullah Hasan. He said the administration is committed to a requirement that any management decisions affecting the monument be made in consultation with tribes.

At Wednesday’s event near the Colorado ski town of Vail, Biden spoke primarily about the historic significance of the site being an old alpine training site where U.S. soldiers prepared for battles in the Italian Alps during World War II. But he also made time to speak about it once being home to tribes.

“I’m also honored to be joined by several tribal leaders here, because this is your progeny, this magnificent land,” Biden said. “These treasured lands tell the story of America. For thousands of years, tribal nations have been stewards of this sacred land, hunting game, foraging for medicinal plants, and maintaining a deep, spiritual bond with the land itself.”

The criticism comes as Biden tries to elevate issues of importance to Native Americans. He named Deb Haaland as Interior secretary, making her the first Native American to lead a U.S. Cabinet agency. Haaland’s selection was hailed as historic by Democrats and tribal groups who said it meant that Indigenous people would for the first time see a Native American lead the powerful department where decisions on relations with 574 federally recognized tribes are made.

Haaland, a member of Laguna Pueblo in New Mexico, wasn’t at Wednesday’s ceremony, and her agency isn’t overseeing this new monument. The Camp Hale – Continental Divide National Monument, which covers more than 53,800 acres near the ski town of Vail, will protected and managed by the U.S. Forest Service under the U.S. Department of Agriculture.

The Ute Indian Tribe has routinely has criticized the Biden administration.

The tribe rebuked Biden in the first days of his term over the oil and gas moratorium. They accused him of breaking a treaty between the tribe and the U.S. government, saying energy-producing tribes rely on development to fund governments and provide services to tribal members. Biden later clarified the rule didn’t apply to tribal lands.

It also claims the Biden administration hasn’t adequately consulted with the tribe on things like drought in the Colorado River basin and failed to give the tribe more control of land within its reservation boundaries.

The Ute Indian Tribe’s reservation — established before Utah became a state in 1896 — is the second-largest of any Native American tribe in the U.S., at more than 7,000 square miles (18,000 square kilometers). But the land is a checkerboard of ownership, and the Utes don’t control everything within the boundaries.