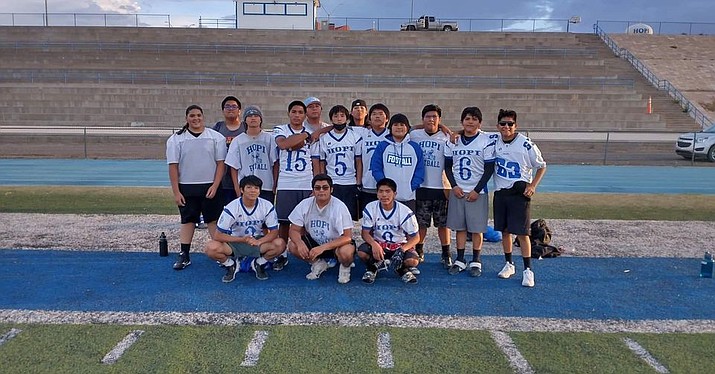 The Hopi Bruins are 5-2 after their win against Sanders Oct. 7. (Photo/Hopi Bruins Facebook)

SANDERS, Ariz. — The Hopi Bruins found their groove in the second half and cruised past Sanders 34-12 in a Little Colorado sectional high school football game played on Oct. 7. The game carried playoff ramifications for Hopi and came after a 46-6 Bruins loss to St. Johns a week ago.

“We had some challenges, but we were able to figure things out and come away with the win,” Hopi head coach Raleigh Namoki, Jr., said. “Even though a team (Sanders) hasn’t won a game in a particular season, that doesn’t mean you don’t have to play hard.”

Hopi jumped out to a 14-6 lead and looked consistent on offense, led by senior quarterback Hubie Talashoma. The Bruins ran the ball mostly for the majority of the first half, against a Pirates defense that hung tough, but that gave up big plays at inopportune times. Sanders’ inexperience showed its ugly head frequently. The Pirates fielded less than five seniors the entire game and that factored into the loss, the head coach said afterward.

The Bruins went up 20-6 on a 30-yard touchdown run by senior offensive back Quintin Nahsonhoya. The two-point conversation failed, but a fired up homecoming crowd at Pirates stadium provided some momentum the entire game.

The Bruins went on to execute a successful mix of plays on offense, showcasing the skills of senior running back Isaac Poliveyuma. Talashoma scored on a left-side keeper to up the score to 28-6 in the third quarter and things looked that much more bleak for the Pirates.

The start of the fourth quarter saw Hopi pour it on offensive and defensively, at one point running consecutive quarterback sneaks that picked up significant yardage. Junior wideout Hayden Etsitty, considered a top conference player, scored for Sanders, but the Hopi offensive deluge was just a bit too much for Sanders to overcome.

But the Pirates (0-7, 0-2) would not go away and some strong play from the running back and quarterback positions showed it. The Pirates inserted junior Neveah Joe at quarterback in the fourth, but with less than six minutes on the game clock, the game was already out of reach.

Hopi is nationally known for producing cross-country athletes, and was featured on ESPN TV a few years ago in a biography. The ESPN documentary showcased Hopi as a tribe which produces top-notch long-distance runners.

Namoki, Jr., said winning the next three games are important for a playoff spot — the first playoff appearance in more than a decade for the Bruins. “We have to stay focused and take one game at a time,” he said. Sanders head coach Ted Goodback said he was proud of his team.

“We have a relatively young team and that showed in the game,” he said. “We played hard. I’m proud of our effort.”