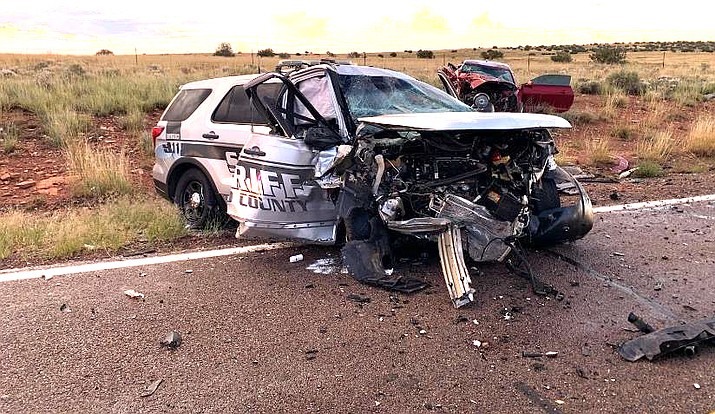 HOLBROOK, Ariz — One person is dead following a head on collision with a Navajo County Sheriff's Office deputy Oct. 2.

At approximately 4 p.m. Sunday, a Navajo County deputy was traveling north on State Route 377 near milepost 24 when he was struck head-on by an oncoming vehicle, NCSO said in a release.

The deputy was able to climb out of the crushed patrol unit and start directing traffic until another NCSO deputy arrived on the scene to check on the two individuals in the other vehicle.

The deputy and the driver of the red Camaro were transported to a local hospital for further treatment.

The passenger of the Camaro ultimately succumbed to his injuries from the car crash.

The deputy was treated for minor injuries and released from the hospital. The driver of the Camaro was air lifted to Flagstaff Medical Center and was listed in serious condition. The investigation is being handled by the Arizona Department of Public Safety.

"Always wear your seatbelts, obey the speed limit signs, and if you are passing make sure it is safe and never pass in a no-passing zone," the Sheriff's Office said.