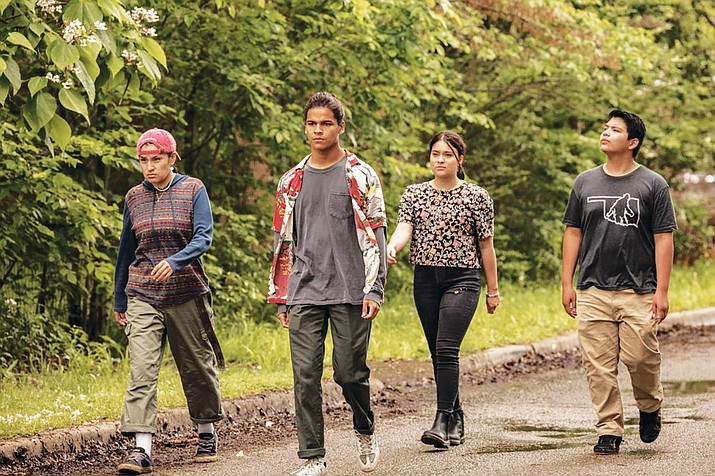 Growing up, Paulina Alexis didn’t have any role models to watch on TV or on the big screen.

That didn’t stop Alexis and her brothers from making their own movies with their dad’s camera equipment.

“Acting is something that I’ve always seen myself doing as a kid but I never said it out loud because we didn’t have any role models at the time,” Alexis said on the latest episode of Face to Face.

“Sure, there was Adam Beach and Gary Farmer and Eddie Spears, all the legends but with 'Reservation Dogs,' it’s like we’re finally representing ourselves in a truthful way, and telling our own stories, instead of just following the script of how other people think we are,” said Alexis, who plays the role of Willie Jack on the hit FX show that was recently renewed for a third season.

Acting out "Lord of the Rings" and "Power Rangers" skits with her brothers and cousins at a young age has been paying off for the 22-year-old.

Alexis, who is of the Alexis Nakota Sioux Nation in Alberta, had a role in the Hollywood blockbuster "Ghostbusters Afterlife" and in Tracey Deer’s award-winning film "Beans," a coming-of-age story about a young Mohawk girl during the Canadian raid on Kanesatake Mohawk territory in the 1990s which is also called the Oka Crisis.

Landing the role of Willie Jack on "Reservation Dogs" has been a dream come true.

“I pretty much am Willie Jack,” said Alexis, who figures about 70 percent of her lines are improvised. “It felt like it was meant to be with Willie Jack.”

Alexis said she initially tried out for the role of Elora, the character played by Mohawk actress Devery Jacobs.

Alexis said she knew as soon as she auditioned for the show that "Reservation Dogs" was going to blow up. Still, the reaction has been a little unexpected. Back home, she says people don’t really care that she’s on the show, but in the United States, she’ll get recognized on a trip to Walmart.

Over the past two Halloweens, kids and adults have been dressing up as Willie Jack and the "Reservation Dogs" main characters.

“It feels really good that now kids have someone to look up to,” said Alexis, who added that it makes her feel good in her heart to see kids dressing up as the characters and that they can now look up on the screen and see themselves.

“It’s all about the youth because they’re the future, they’re the ones that are going to be writing these stories and making more movies when they get bigger,” she said. “We’re just scratching the surface right now. I don’t know how to explain it, but for me, this plays a big part for the youth because I never had role models growing up and now they do. I think that is something I’m most proud of.

Alexis said she hopes to direct movies, one day.

The success of the show and all that comes with that has been a bit overwhelming for Alexis, at times. Aside from family and friends, hockey and Indian Relay Racing, help keep her grounded.

“I probably watched relay two or three years ago for the first time and I fell in love with it, I was like yo I’m doing this, I don’t care I’m doing it,” she said. “I finally got enough bucks to get myself a horse and I just kept on training myself, every single day, every single day I fall off. I can’t even count how many times I fell off my horse.”

Aside from the third season of "Reservation Dogs," Alexis also has a role in the upcoming mini-series "Bones of Crows," and voice acting role in an unnamed, stop-motion animated project.