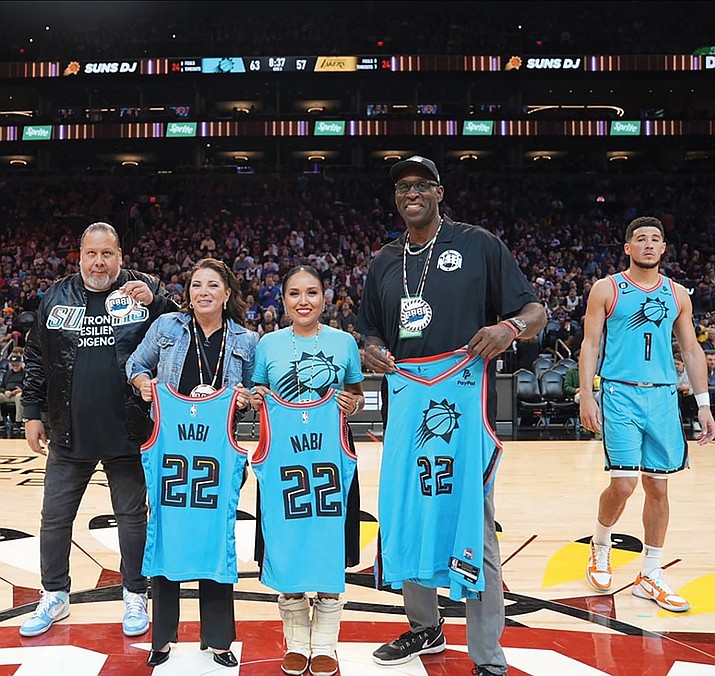 PHOENIX — The Native American Basketball Invitational (NABI) was honored during the Phoenix Suns game Nov. 22. Founded by Mark West, a former Phoenix Suns player, the late Scott Podleski and GinaMarie Scarpa, NABI is the largest all Native American basketball tournament in North America, with 136 teams representing Tribal communities from across the country, competing each summer.

“Our 20-year collaboration with the Suns and Mercury has elevated NABI significantly. The tournament showcases ‘Rezball’, a popular form of basketball played on tribal lands all over the Americas,” Scarpa said. “Our annual tournament highlights the overlooked talent of our Indigenous athletes who play the championship games on the same wood floor that both the Suns and Mercury compete on.”

“For two decades, the Phoenix Suns and Phoenix Mercury have led the way and set the stage for other NBA teams to embrace and support Indigenous youth and communities in their respective states. This moment marks a significant time for NABI, the Suns, Mercury, and all Indigenous people across Arizona and beyond,” said Stephen R. Lewis, Governor of the Gila River Indian Community.

“The Phoenix Suns and Phoenix Mercury are honored to celebrate 20 years of partnership with NABI,” said Graham Wincott, Senior Director of Marketing for the Suns. “Our longstanding relationship with NABI is the foundation of the ORIGINATIV program representing Arizona's 22 Tribal Nations and celebrating the shared love of basketball. We look forward to continuing our work together and helping to showcase young athletes from tribal communities across the country for years to come.”

Each summer, NABI has an estimated $1.5 million-dollar economic impact to the city of Phoenix. In addition, NABI has awarded over $400,000 in grants and college scholarships.