Buttigieg gets an earful about tribal roads during trip to Southwest
Feds aren’t meeting their obligations to Indigenous communities, leaders say, and instead put up roadblocks to building and fixing much-needed infrastructure 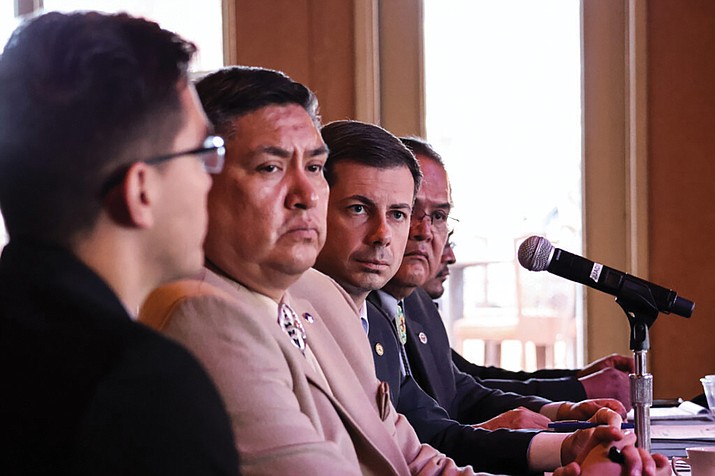 U.S. Transportation Secretary Pete Buttigieg said tribal roads have been historically underfunded in America, and the way to correct this is through strong partnerships and dialogue during a visit to the Indian Pueblo Cultural Center in Albuquerque on Nov. 16, 2022. (Photo/Gino Guttierez for Source NM)

ALBUQUERQUE. – Tribal leaders in New Mexico had a simple message to U.S. Transportation Secretary Pete Buttigieg: Give us money to fix roads, and patch up the broken agreement the federal government has failed to maintain.

“The so-called federal responsibility is not met for these tribes,” Ron Shutiva told Buttigieg during his stop in Albuquerque Nov. 16. “That federal responsibility, our great white father, is supposed to be taking care of all of our needs within Indian Country because they took the land that we have away from us.”

Shutiva, the tribal liaison for the New Mexico Department of Transportation, is from Acoma Pueblo and has seen firsthand for decades the problem-solving tribal nations have to do in order to fix and repair roads using a funding formula stretched between multiple government sources.

While Shutiva’s message came near the end of the Nov. 16 meeting, it echoed what tribal representatives from the Pueblos, Apache bands and Navajo Nation expressed regarding funding for new road projects, poorly maintained roads, and problems with federal grants that are excluding tribal nations from millions in investments under the Biden administration.

Buttigieg’s first visit on Nov. 16 to the Indian Pueblo Cultural Center came after a stop with tribal leaders at the Southwest Indian Polytechnic Institute on the Westside of Albuquerque. After the event at the IPCC with the All-Pueblo Council of Governors, he headed to Arizona to meet with Hopi Chairman Timothy L. Nuvangyaoma and outgoing Navajo Nation President Jonathan Nez. Buttigieg did also meet privately with Navajo President-Elect Buu Nygren in Albuquerque.

Buttigieg is visiting the Southwest to tout investments in local communities under President Biden’s Bipartisan Infrastructure Law that was passed in 2021.

His listening session with Pueblo leaders highlighted systemic problems creating the reality that more than 60% of tribal roads are unpaved, according to federal data.

Tribes said the federal government could help with even basic necessities, such as ground salt for icy roads and updated equipment that can assist with general maintenance.

Tribes also expressed concerns that planning and development of shovel-ready projects requires expertise they do not all have, so federal funding for such projects could skip tribal nations in New Mexico.

Little said his tribe has lost out on funding opportunities by spending the time to line up engineers and other specialists to meet guidelines to apply for federal dollars, in turn missing deadlines. He’d like to see reform that guarantees money down the road if tribes are finalizing their road work plans.

“There’s two years we lost with funding,” he said. “So there would have to be some type of mechanism that when we start to process, we’re going to be assured that the funding is going to be there.” 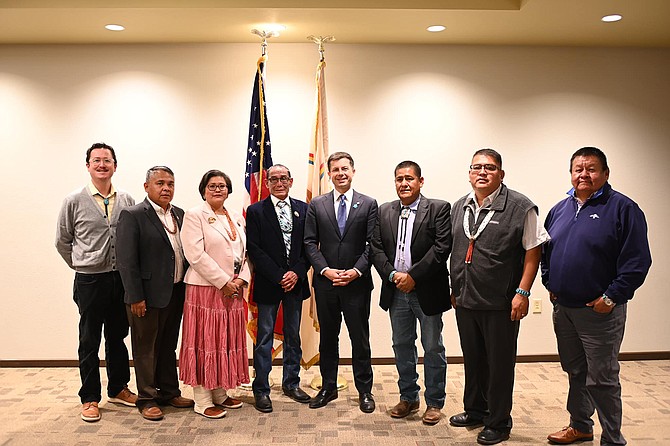 Rising prices are also a concern. Tribal officials said the cost of constructing one mile of road went from $1 million before the pandemic to more than $3 million now. And that’s left some with underfunded projects.

On top of that, federal dollars allocated to maintain existing roads are not keeping up with inflation. Charles Riley from Acoma Pueblo told Buttigieg that his community receives $100,000 for road maintenance, but the annual costs to complete the work totals more than $900,000.

“The road maintenance program that’s run through the Bureau of Indian Affairs is never enough money compared to the amount of money that we get for construction,” Riley said.

Tribes also expressed concerns over bureaucratic mechanisms that limit the scope of their road projects.

To break it down, the Federal Highway Administration allocates millions for road projects through the Tribal Transportation Program. That program is often used to pull down millions more for construction projects in matching funds. However, the Safe Streets and Roads for All program under Biden’s infrastructure law prohibits tribes from using those funds to apply for competitive grants.

This issue was brought to Buttigieg by nearly every tribal representative on Wednesday, and it’s something he acknowledged that his office is working to fix.

“We’ll be thinking about this question of the (tribal dollars) match, which we’re hearing a lot, and what we can do to try to create the right kind of flexibility there,” Buttigieg said after he heard from the Pueblo leaders. “I do not know how you do it with the formula dollars for maintaining the number of lane mile roads that exist out there.”

This story is courtesy of Source New Mexico. Shaun Griswold reports on issues important to Native Americans in urban and tribal communities throughout the state, including education and child welfare.