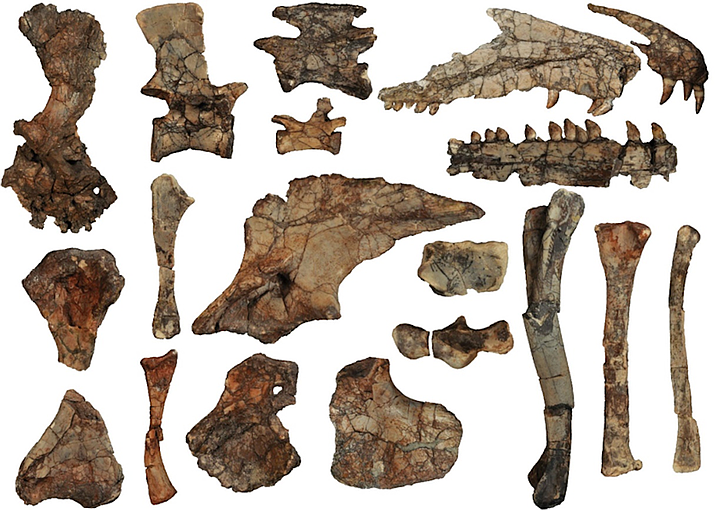 “This reptile (Puercosuchus traverorum) superficially resembled living Komodo dragons in size and body shape. Its serrated and sharp teeth … would have made Puercosuchus a formidable predator,” PEFO said in a press release announcing the study. “Although its fossils are found alongside those of early dinosaurs, Puercosuchus was not a dinosaur.”


NPS staff christened this new genus of reptile Puercosuchus after the Puerco River in PEFO just north of where a group of Girl Scouts first discovered the animal's fossils in 2014 and the species name “traverorum” in honor of PEFO’s former superintendent and his spouse Brad and Denise Traver.

“It’s an enormous honor for me and my wife,” Brad Traver said. “The fact that her efforts are recognized as well was a touching gesture since her work was important but lower profile.”

The couple first met at Grand Canyon National Park and were married at Point Imperial on the North Rim almost 31 years ago. Mrs. Traver was active in maintaining the websites for the park’s friends group, Petrified Forest Museum Association and its Field Institute which she also helped found and coordinate educational programing where the public can join NPS staff in fossil excavations. .

“He was always very interested and curious and supported us In terms of making sure we had what we needed and we're able to bring on student interns,” Adam Marsh study author and PEFO paleontologist said.

Traver helped hire the park’s first full-time paleontologist Bill Parker, the role was originally more being “the park service’s eyes on the ground” for the numerous museums and institutions that do research in the park. However the job has evolved along with PEFO’s paleontology department which has seen greater public outreach and a paleontology fossil prep lab for the park which allows the park service to undertake removing fossils from its rock.

Puercosuchus traverorum is found at two locations in northern Arizona: within Petrified Forest National Park (PEFO) around Blue Mesa and an area near St. John’s in Apache county.

Puercosuchus predates the split of crocodiles and birds from their last common ancestor according to Mash.

“What this find tells us is that this lineage is really diverse and it probably radiated early after the End-Permian mass extinction when we had the supercontinent Pangea,” Marsh said.

The End Permian extinction occurred around 252 million years ago and was the planet’s largest extinction event seeing nearly 90 percent of species go extinct according to National Geographic which was followed by the End Triassic extinction event.

“The End Triassic Event is caused by basically the supercontinent Pangea breaking up,” Marsh said. “The northern Atlantic Ocean starts to unzip like a zipper and volcanic events put a lot of carbon and sulfur in the air. We see through the Chinle (rock) Formation here at Petrified Forest that things get drier and hotter. And we're likely seeing biological responses to that changing environment before even the volcanic start at the very end of the Triassic.”

Puercosuchus lived between these two events around 220 million years ago with hundreds of fossils from at least nine individuals discovered found so far.

In the Triassic these animals were living next to rivers and lakes which is how they got preserved, the PEFO bone bed is likely next to an ancient river channel. There is some evidence of these being somewhat social animals because there’s different size classes being fossilized together however Marsh is quick to point out it’s an idea requiring more research.

The St. John’s fossil locality Marsh considers to be a contemporaneous event to the find In PEFO however it potentially happened more rapidly because more of the fossils are articulated or connected in the positions when the animal was alive.

Puercosuchus has the potential to reshape our understanding of the history of life on Earth is its teeth it’s discovery confirms some teeth from this time originally thought to be early dinosaurs can’t actually be differentiated from some other reptiles and many specimens in museum collection need to be reexamined.

“What Puercosuchus is showing is that those teeth and that tooth shape is not unique to dinosaurs and probably carried through a lot of these early reptile lineages,” Marsh said. “So when you find an isolated tooth if you can't say, ‘oh, that's a dinosaur’ because it could be any number of things including something like Puercosuchus.”

Puercosuchus is closely related to Azendohsaurids a group that is probably much more common throughout North America in the distant past because these fossils are found relatively late in the Triassic.

“There's probably a good chance that these animals are running around North America in the middle Triassic as well and we haven't found the right places to look,” Marsh said.

Brad Traver retired from the National Park Service in 2019 after 37 years of service and reminsanced over his tenure with this naming.


“My (friend) remarked that my name will now be in the history books - I replied “It's better that; it'll be in the science books,” Traver said.