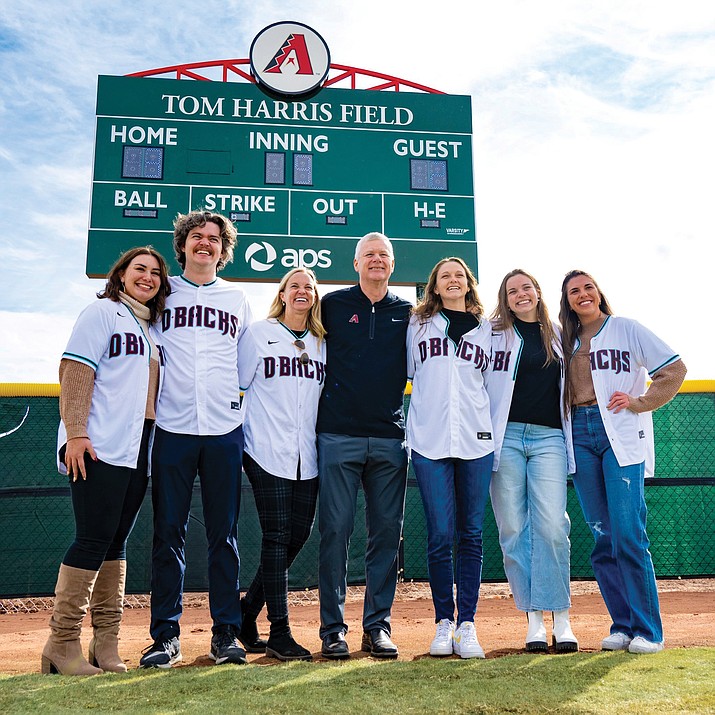 The Winslow community celebrated the completion of the Diamondbacks field Nov. 19. (Photos/Jim Buckley/City of Winslow)

The field is named after Winslow native and D-backs Executive Vice President and Chief Financial Officer Tom Harris, who has dedicated most of his career to the organization, serving for over 28 years.

The naming of the field was a surprise for Harris with D-backs Managing General Partner Ken Kendrick announcing the news during the ceremony.

Tom Harris Field in Winslow marks the 44th field since the program's inception in 2000. Since then, the Arizona Diamondbacks Foundation, with support from APS, has built or refurbished 44 baseball fields across the state of Arizona as part of the Mike Kennedy "Diamonds Back" Field Building Program presented by APS.

"One of our core values is to, 'celebrate each team player's long-standing commitments to our organization,' and I cannot think of a better way to honor that value than naming this field after Winslow native and our CFO Tom Harris," said D-backs President and CEO Derrick Hall. "It is fitting that the very community where Tom grew up will now be home to a youth baseball field bearing his name that will give children there an opportunity to grow up with baseball. This would not have been made possible without the generosity and support of our terrific partner APS."

"The Diamondbacks and APS share a commitment to giving back to the communities where we live, work and play, and Tom Harris Field is the latest example of our longtime partnership to do just that," said APS President Ted Geisler. "It is always exciting to be a part of building a community's vitality, and this field and the surrounding complex will surely be a magnet for residents and visitors alike for years to come."

Harris originally joined the D-backs as Vice President, Finance in July 1995 after leaving the Phoenix Suns and America West Arena. He began his career in 1985 after earning a B.A. in accounting from Arizona State University, where he also earned his master's degree in taxation. Harris is a board member of the Southwest Autism Research & Resource Center, a board member for the Arizona Diamondbacks Foundation, a member of the Thunderbirds and was inducted into the ASU School of Business Hall of Fame. Harris and his wife, Kathleen, reside in Phoenix and have four children: Sean, Sarah, Kelly and Katie.

The full list of fields in the Mike Kennedy "Diamonds Back" Field Building Program presented by APS is below. For more information, visit dbacks.com/fields.

Information provided by the Arizona Diamondbacks.