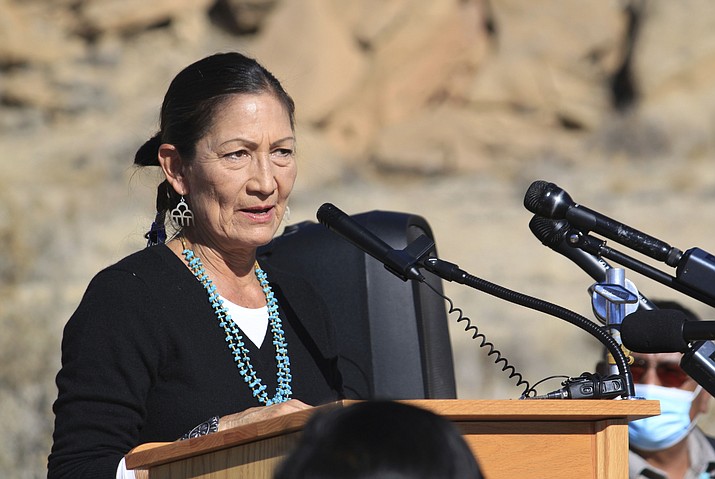 United States Interior Secretary Deb Haaland addresses a crowd during a celebration at Chaco Culture National Historical Park in northwestern New Mexico, Nov. 22, 2021. The U.S. Interior Department's plan to withdraw hundreds of square miles in New Mexico from oil and gas production for the next 20 years is expected to result in only a few dozen wells not being drilled on federal land surrounding Chaco Culture National Historical Park, according to an environmental assessment. (AP Photo/Susan Montoya Bryan, File)

ALBUQUERQUE, N.M. — The U.S. Interior Department's plan to withdraw hundreds of square miles in New Mexico from oil and gas production for the next 20 years is expected to result in only a few dozen wells not being drilled on federal land surrounding Chaco Culture National Historical Park, according to an environmental assessment.

Land managers have scheduled two public meetings next week to take comments on the assessment made public Thursday.

The withdrawal plan was first outlined by Interior Secretary Deb Haaland in 2021 in response to the concerns of Native American tribes in New Mexico and Arizona that development was going unchecked across a wide swath of northwestern New Mexico and that tribal officials did not have a seat at the table.

In addition to the proposed withdrawal, Haaland — who is from Laguna Pueblo and is the first Native American to lead a Cabinet agency — also committed to taking a broader look at how federal land across the region can be better managed while taking into account environmental effects and cultural preservation.

Indigenous leaders and environmental groups reiterated this week that the broader look would be a more meaningful step toward permanent protections for cultural resources in the San Juan Basin.

The environmental assessment bolsters that argument since it notes that the proposed withdrawal would not affect existing leases and that much of the interest by the industry for future development already is under lease or falls outside the boundary of what would be withdrawn.

With only a few dozen wells expected in the area, natural gas production for the area would decrease by half of 1 percent and oil production could see a 2..5 percent reduction.

However, the New Mexico Oil and Gas Association argued that even though the withdrawal would not affect leases on Navajo land or allotments owned by individual Navajos, those leases essentially become landlocked by taking federal mineral holdings off the board.

Navajo Nation officials have made similar arguments, saying millions of dollars in annual oil and gas revenues benefit the tribe and individual tribal members Some leaders have advocated for a smaller buffer around Chaco park to be protected due to the economic implications.

The industry group said there are more than 418 unleased allotments in the buffer zone associated with over 22,000 allottees.

Environmentalists say the potential development for the withdrawal area represents just a fraction of the 3,200 wells overall that the region could see over the next two decades.

Mike Eisenfeld of the San Juan Citizens Alliance has been monitoring and protesting development throughout the region for years. He said Friday that the larger issue is the expansive area beyond the withdrawal zone and that federal land managers need to evaluate requests for permitting within Haaland's bigger "Honoring Chaco" initiative.

"We think that requires extensive consultation on protecting this region from industrialization of the landscape," he said.

In June, the All Pueblo Council of Governors traveled from New Mexico to Washington to urge the Interior Department to finalize its proposal to protect the Chaco area, arguing that public land management should better reflect the value of sacred sites, cultural resources and traditional stories that are tied to the region.

A World Heritage site, Chaco Culture National Historical Park is thought to be the center of what was once a hub of Indigenous civilization with many tribes from the Southwest tracing their roots to the high desert outpost.

Within the park, walls of stacked stone rise up from the canyon bottom, some perfectly aligned with the seasonal movements of the sun and moon. Archaeologists also have found evidence of great roads that stretched across what is now New Mexico, Arizona, Utah and Colorado.