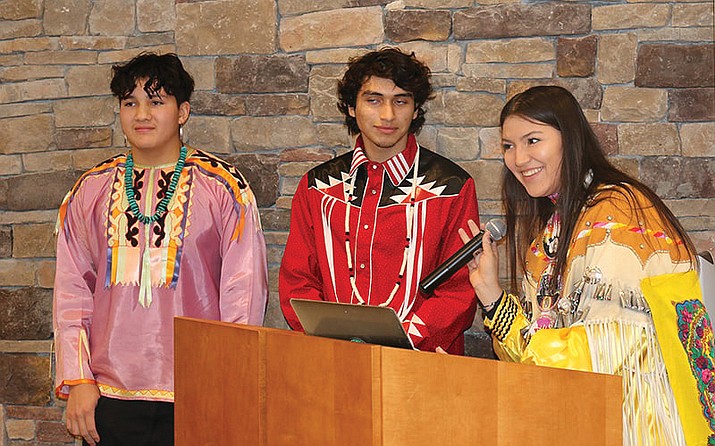 WASHINGTON — Kiana Beazley, a Bear Clan member of the White Mountain Apache tribe, remembers the four days of ritual that celebrated her transition from girlhood to womanhood, surrounded by family and the presence of her ancestors on Indigenous land.

That loss is what led Beazley to join a group of Arizona high school students and alumni in Washington this week to lobby for a bill that would block development of a copper mine proposed for Oak Flat, land that is sacred to the San Carlos Apache.

“I want other girls and future generations to have the same opportunity I had to experience the Sunrise Dance and have their ancestors and family and community stand with them each step of the way,” said Beazley, a sophomore at Xavier College Preparatory in Phoenix.

This week’s lobbying was just the latest effort by the Brophy Native American Club, which has members both at Xavier and Brophy College Preparatory, to draw attention to the fight over Oak Flat. Students said they ran from the San Francisco Peaks in Flagstaff to a gathering at Oak Flat earlier this year, and they traveled to the city of San Francisco when the 9th U.S. Circuit Court of Appeals heard arguments in the case.

“We’re here on Capitol Hill talking to some career politicians about Oak Flat and trying to stand up for a major environmental issue and a major tribal issue,” said Sergio Arvizu-Rivera, a Brophy senior who was on the trip.

It came in a week when courts and congressional panels handed a string of setbacks to the Resolution Copper mine.

The 9th Circuit announced Thursday that it would reconsider its earlier rejection of a claim by the San Carlos Apache that the mine would infringe on their right to worship by destroying Oak Flat. And the Arizona Court of Appeals ruled Tuesday in a separate case that the Arizona Department of Environmental Quality erred when it issued a permit in 2017 that would have let work proceed on the Resolution Copper mine.

The House Natural Resources Committee also rejected, along party lines, a resolution introduced by Rep. Paul Gosar, R-Prescott, that would have required the U.S. Department of Agriculture to hand over all documentation related to its decision to pull approval for the mine at the last minute in 2021. 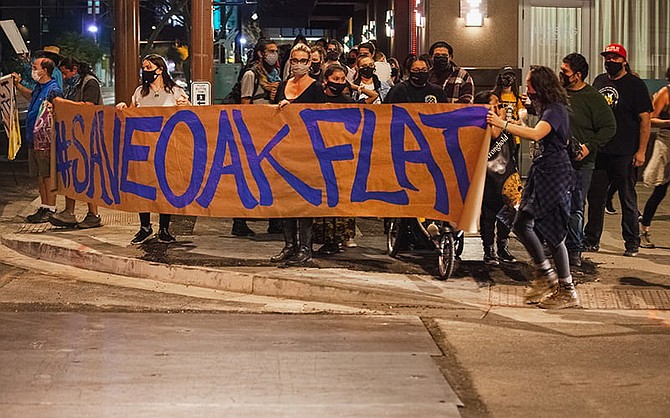 Activists from Apache Stronghold march toward the federal courthouse in Phoenix in early 2021 to protest the government's OK of environmental permits for the proposed Resolution Copper mine. (Photo/Alberto Mariani/Cronkite News)

That committee is chaired by Rep. Raúl Grijalva, D-Tucson, who is the main sponsor of the Save Oak Flat Act. That bill, which has 102 co-sponsors, would reverse the 2014 law that transferred 2,422 acres of federal land in southeastern Arizona to Resolution Copper for the mine.

Grijalva said the Save Oak Flat Act would “correct what I consider to be a very, very bad side deal” that allowed that land transfer, which was tacked onto the must-pass Defense Department budget in the waning days of 2014. But Grijalva’s bill, which the committee passed in April 2021, has yet to get a vote before the full House, which adjourns in weeks.

Arvizu-Rivera said he was excited to meet Grijalva, not only because the lawmaker has long fought to protect Oak Flat, but because he also helps popularize the cause “by not making this just a tribal issue.”

Supporters of the mine point to the economic benefits it will bring to an economically struggling region. Resolution Copper estimates that it could create up to 3,700 direct and indirect jobs at full production and generate as much as $113 million state and local taxes annually.

They also argue that it will provide the copper needed for the transition to clean energy like solar and electric cars. The Resolution mine would be one of the largest copper mines in North America and could provide up to one-fourth of annual U.S. demand for copper, the company claims.

“I understand the idea of not in my backyard, but there has to be a little bit of reality in the equation,” said Rep. Bruce Westerman, R-Ark., who said experts predict the world will need to mine 550 metric tons of copper in the next 25 years to meet demand.

“Without mining, we don’t have the electronics and the clean energy future that we’re looking forward to,” Westerman said.

But Andrew Reed, a Brophy senior who said he is part of the Nome Eskimo Community in Alaska, said the fight over Oak Flat is more than a “not in my backyard” dispute.

Rep. Raul Grijalva, D-Tucson, has long fought against the planned Resolution Copper Mine, and is the sponsor of the Save Oak Flat Act. (Photo by Tori Gantz/Cronkite News)

“To put it in like a Christian perspective, what if they blew up the Sistine Chapel, or the Holy Sepulchre in Jerusalem? What if they destroyed that to get a deposit there?” he asked. “Yes, we could still pray and do baptisms and everything but it wouldn’t be the same. That would just be a loss, that’s not the way it was meant to be.”

Resolution Copper said it has been working closely with local Indigenous groups for years to protect cultural and historic sites around the mine, creating tribal review boards, preserving and nurturing Emory Oaks, setting aside 800 acres for Apache Leap and more.

But court filings in the many legal challenges to the mine have also said that the mining process Resolution intends to use will eventually leave a crater 1,000 feet deep and up to two miles wide where Oak Flat is now.

For Beazley, that’s too much.

She remembers dancing from 5 a.m. to midnight in a beaded buckskin outfit weighing nearly 30 pounds, in a ceremony that was “not only life changing, but it was also spiritually changing. And I grew closer to my creator and I also grew closer to my ancestors.”

Although she is White Mountain Apache, Beazley thinks of the San Carlos Apache as “like my brothers and sisters,” which is why she feels connected to Oak Flat.

“Oak Flat being holy land to San Carlos Apache, those females who are coming into womanhood have their ceremonies there,” she said. “If the mining company goes there, the whole ceremonies are going to be completely gone, and the women there aren’t going to be able to experience the same experiences I have.”