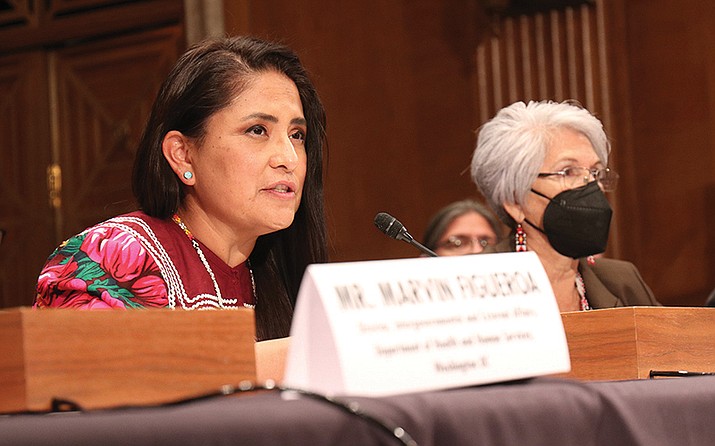 WASHINGTON — A trio of bills affecting water rights and infrastructure for Arizona tribes took a step closer to becoming law Nov. 16, a move one official said his tribe has been waiting for since being forced onto the reservation.

The Senate Indian Affairs Committee, without debate, approved bills granting water rights to the Hualapai, letting the Colorado River Indian Tribes lease their water, and adding funding and extending the deadline for review of a water system for the White Mountain Apache.

Tribal leaders welcomed the votes, which they called the culmination of hard-fought struggles by their tribes.

But Wednesday’s vote may not be the end of that fight. With just six weeks left in the current Congress, there is little chance the bills can win approval from the full Senate and then from the House, meaning tribes may have to start over again in 2023.

“It causes concern for me. I’m hoping we have enough to keep moving and it doesn’t get stalled,” Vaughn said.

The Senate hearing comes as the West suffers through a 22-year-long drought that has led to historically low water levels in Lake Mead. The Colorado River supplies drinking water to as many as 40 million people, according to the Bureau of Reclamation, which this year announced steep cuts in the amount of water allocated from Lake Mead.

Those cuts, which take effect next year, would hit Arizona hardest of the “lower basin” states in the Colorado watershed. Starting in 2023, Arizona will lose 592,000 acre-feet of water from the Colorado River, compared to 104,000 acre-feet for Mexico, 25,000 for Nevada and none for California.

Some fear the new reductions could mean that tribes will lose water rights they have been fighting to get for years.

A report by the University on Montana’s Water and Tribes Initiative said 11 tribes in Arizona have unresolved claims to water from the Colorado River. Some, like the Hualapai, are waiting on congressional action that could grant them water rights, while others are not even that far along.

If Congress does pass the Hualapai Tribe Water Rights Act of 2022, the tribe would be allowed to draw and store about 4,000 acre-feet of water a year from the Colorado, Verde and Bill Williams rivers, as well as from groundwater on the reservation. The bill would also fund design and construction of a water treatment and distribution project on the reservation.

The third bill would amend the White Mountain Apache Tribe Water Rights Quantification Act of 2010 to extend, from 2023 to 2025, the deadline for the Interior Department to complete its review of the tribe’s proposed rural water system and add $250 million in funding for the project.

The three bills were co-sponsored by Arizona Democratic Sens. Mark Kelly and Kyrsten Sinema. In a prepared statement Wednesday, Kelly applauded the committee’s approval of the bills, thanking supporters from both parties.

“Access to water is critical to Arizona’s success and continued economic growth,” Kelly’s statement said. “Thanks to our efforts and work across the aisle, our legislation to protect and strengthen tribal water rights, tackle Western drought, and expand access to clean drinking water are one step closer to becoming law.”

But that assumes Congress can act with unusual speed before the end of the year. Vaughn said he is concerned, but buoyed by the fact that most of the lawmakers behind the current bills will be back for the next Congress.

“I’m hoping that the main part of our support is still there,” Vaughn said. “We had support from (Prescott Republican Rep.) Paul Gosar, Kelly and Sinema” all of whom are returning in 2023.

Despite the delays and uncertainty, however, Vaughn called Wednesday’s action a sign of hope.

“We’ve long awaited our rights to the Colorado River, and now we’re on the verge of reaching it,” he said. “It’s a good day for the Hualapai.”