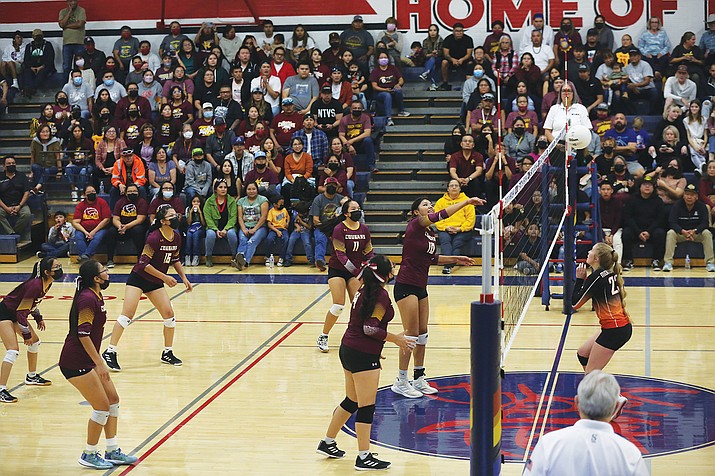 The Rock Point Cougars defeated the Williams Vikings Nov. 5 at the 1A State Championships at Coronado High School in Scottsdale. (Marilyn R. Sheldon/NHO)

SCOTTSDALE, Ariz. — The Rock Point Lady Cougars brought home their second consecutive state title Nov. 5, when they defeated the Williams Vikings, 3-2, at the 1A State Championships at Coronado High School in Scottsdale.

The Cougars dug deep and battled the Vikings in five sets to claim the title.

Williams rebounded in set two, fighting their way to a 27-25 win.

The Cougars cruised into the state championships with a 13-1 record, their only loss was to the Vikings Aug. 27.

It was the last time the Cougars would lose this season.

“I knew we were capable,” Rock Point Head Coach Kyle Arthur said. “After our first championship last year, expectations were very high. We lost five seniors, including our setter, last year. I told them to trust the process, and work hard. I’m very thankful they stuck with it.” 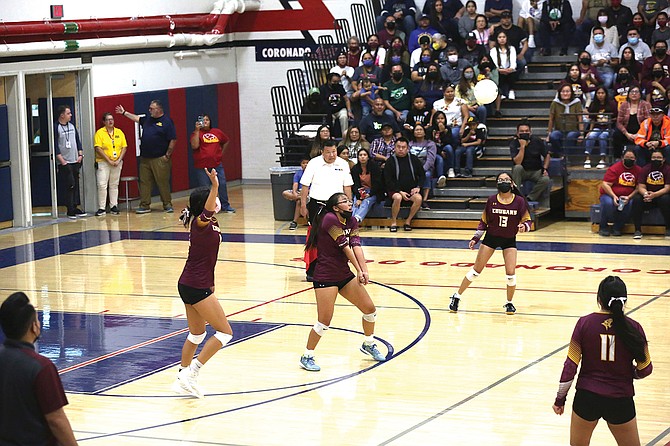 The Rock Point Cougars defeated the Williams Vikings Nov. 5 at the 1A State Championships at Coronado High School in Scottsdale. (Marilyn R. Sheldon/NHO)

The six-foot-one Begay finished the season with 702 kills, 67 blocks and 94 aces.

Despite being ranked second going into the tournament, the path wasn’t easy for the Cougars.

After a three-set, first-round win over Desert Christian at home Nov. 1, things got tougher for the Cougars.

The Cougars went to work in the tie breaker, and ground out a 15-11 victory to advance to the finals.

Arthur had nothing but praise for his team.

“Ive been with these girls since their eighth grade year,” he said. “They’ve overcome lots of obstacles, and know they can overcome adversity. they have great chemistry, and are comfortable with themselves.”

“Anna (Arianne Begay) has a work ethic that is out of this world. She hasn’t missed a pratice this year, and is a great example for her teammates.”