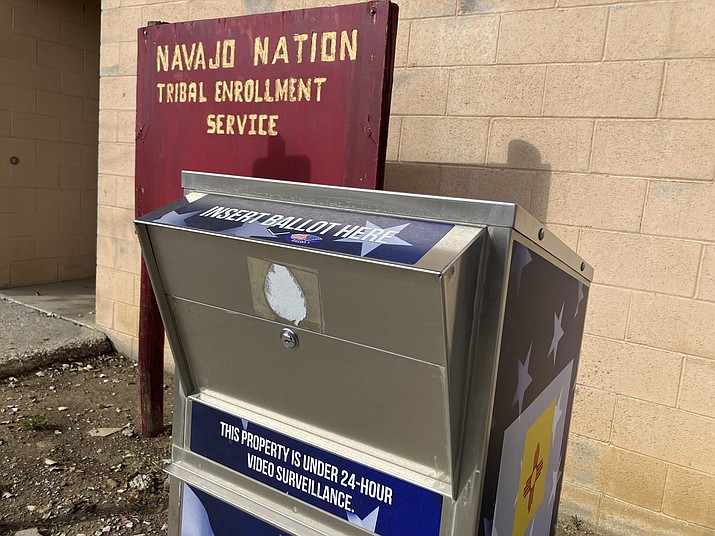 Shannon McCabe quickly walked out of a voting location Friday on the Navajo Nation after she cast an early vote for New Mexico governor, Congress and local races.

She was in a hurry to drive a half hour west into Arizona to vote early in Window Rock, the Navajo Nation capital and the only location where she could vote early in-person in her tribal election.

She planned to use the drive to figure out who she will support with a vote.

“What we need in the community, like, you’ll see all the muddy roads — people need better roads,” she said. “And one thing is just providing more support to the police officers. We’ve had emergencies over the summer where it took like three hours to get police to respond. And then even then, once you do get a final report, it kind of just stops right there. So we need a better judicial system.”

McCabe’s work means she has to live in Albuquerque and continue to take care of her family home on the Twin Lake Chapter House, some 153 miles away, on the Navajo Nation.

She is one of thousands of Native Americans in New Mexico that live and work in urban settings while maintaining land and cultural responsibilities in tribal nations across the state. The Navajo Nation reports 399,494 enrolled citizens. This doesn’t mean all these people live on the reservation that extends across parts of New Mexico, Arizona and Utah.

According to the 2020 Census, the total people living on the Navajo Nation decreased to just more than 94,000 residents, according to data analyzed by the Arizona Commerce Authority.

More than 126,000 people are registered to vote in the Navajo Nation tribal election.

As early voting is encouraged and more widespread across the country, Navajo Nation residents who want to vote in person have to rely on absentee ballots to participate in their tribal elections or get in their car and drive home.

“I’d like a place to vote closer for tribal elections,” she said. Her voting experience requires more than 700 miles round trip.

This is why so many Native communities continue to make Election Day a community event.

In New Mexico, tribal administrative offices do run their own elections in collaboration with the Secretary of State’s Office.

This means that Native voters can cast ballots for state, federal, county and tribal offices on the same ballot. However, early in-person voting is limited to one location compared with urban settings in Santa Fe or Albuquerque that have multiple sites with consistent hours weeks leading up to Election Day.

As an example, Cibola County hosted just three days of early voting at its site in Acoma Pueblo. Anyone who is an Acoma citizen but lives outside the community has to make that three-day early voting window to participate in their tribal election or drive back to vote on Election Day.

This might be a capacity issue where there aren’t enough voters to keep an early voting site operating longer. For instance, in Zuni Pueblo, the early voting site was open for two weeks and saw more than 300 people cast ballots in-person from a community with more than 6,000 people.

At this time, there isn’t an effort to change election codes so the state and tribes can coordinate an early in-person voting setup that would make everything easier, a one stop shop in a sense.

Hours after McCabe voted, Nez and Nygren were at a rally in Gallup reminding urban Natives in the city to get out to the polls.

“The most important part on our part is to make sure that you reach out to your friends and your relatives to make sure that they’re voting at the state level,” Nygren told the crowd. “I know there’s bordertowns that are very critical. There’s Farmington, there’s Gallup, and there’s other areas across Navajo that are working collectively.