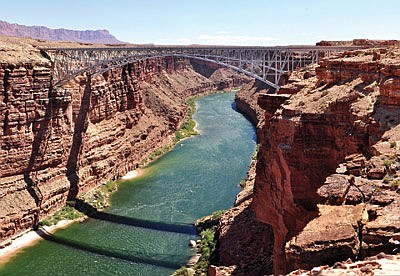 A portion of the Colorado River and Navajo Bridge flowing through Marble Canyon. Photo/Flickr commons

WASHINGTON — The Supreme Court says it will hear a water dispute involving the U.S. government and the Navajo Nation.

The high court said Friday it would review a lower court ruling in favor of the Navajo Nation, which spans parts of Arizona, Utah and New Mexico. The government signed treaties with the Navajo Nation in 1849 and 1868 that established the reservation. It was later expanded westward to the Colorado River, which forms the reservation’s western boundary. At issue in the case is water from the Colorado River, which itself is shrinking in part because of overuse and drought.

The Supreme Court also agreed to hear two other cases. One is a patent case in which biotechnology company Amgen sued Sanofi and Regeneron for patent infringement. The other is a $90 million trademark dispute involving controls used to operate heavy equipment such as cranes.