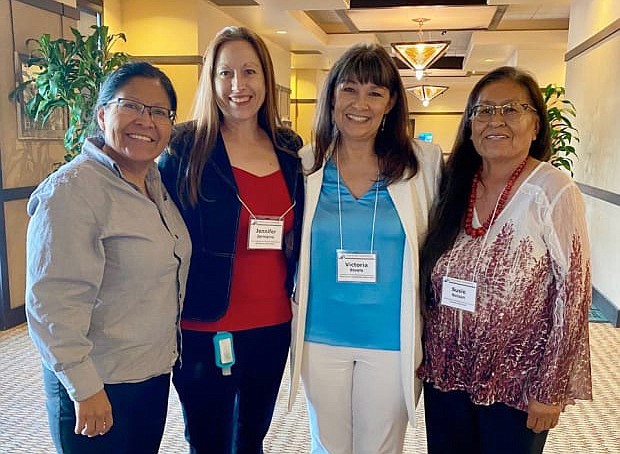 ARIZONA — In a historic first, seven Native American women will be sitting on the bench in Arizona after Election Day.

A Justice of the Peace oversees misdemeanor offenses, domestic violence cases, civil lawsuits where the amount in dispute is under $10,000, landlord and tenant controversies and a range of other civil and criminal traffic offenses, like DUI’s.

Each county has justice courts and the number of justices in a county depends on the population size.

Deborah Begay, Diné, was elected to the Moon Valley Precinct in 2021 as the first ever Native American Justice of the Peace in Maricopa County. Her current term ends on Jan. 1, 2025.

Susie Nelson, Diné, is the Justice of the Peace at the Kayenta Justice Court. She is up for re-election this year and is running unopposed. She was first appointed to the bench in 2007 by the Navajo County

Board of Supervisors after the former judge retired.

Three other justices up for election this year are a shoo-in since they’re also running unopposed.

Arizona state Sen. Victoria Steele, Seneca-Mingo, and state Rep. Jennifer Jermaine, White Earth Ojibwe, both have their legislature terms ending next year and are on the midterm ballots this election running for Justice of the Peace in their respective counties.

“I’m so excited to be the next Justice of the Peace for the San Marcos Justice Court in the city of Chandler, under the Maricopa County Court System,” Jermaine said.

Some call the transition from the state Legislature to the justice court a retirement plan for politicians but Steele and Jermaine both say the decision was a lot deeper than that.

“For me, it was more about continuing my work on domestic violence and continuing the work on where victims intersect with the court experience. Making sure that we are building pretrial victim services into every step,” Jermaine said.

“I think that will help me be a good Justice of the Peace because I can see all the different sides of a scenario and see how the different jurisdictions intersect to be able to navigate and help the victims through,” Jermaine said.