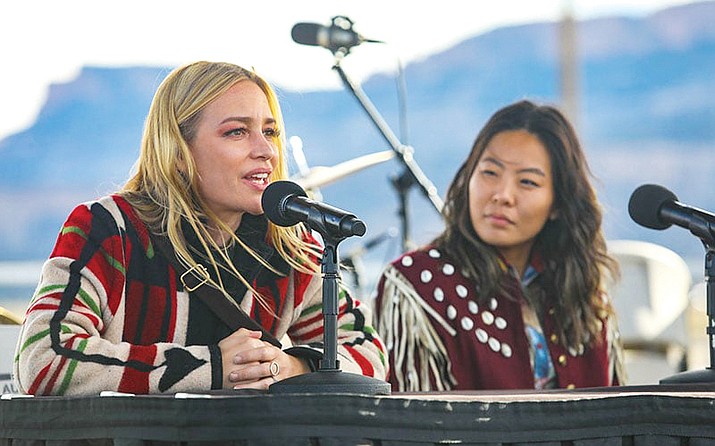 KAYENTA, Ariz. — Activists, advocates and actors mounted horses on a Saturday morning last month for a ride through the red rock of El Capitán Mountain in iconic Monument Valley.

The Solidarity Trail Ride was part of the nationwide event Ride to the Polls, which was organized by Protect the Sacred, a grassroots organization to motivate young Indigenous voters.

The Oct. 15 event included a panel of speakers who stressed the importance of reclaiming Indigenous power at the polls.

By lunchtime, dozens of riders from around the country arrived at the Kayenta Rodeo Grounds, which is surrounded by black mesas and wide-open desert. Diné families gathered in the bleachers as a green flag depicting a rider on horseback with the words “Reclaim Your Future” waved in the breeze.

Protect the Sacred organized a similar event for the primary election, but instead of horses, participants skateboarded to the polls.

“It’s about coming together,” said Mo Brings Plenty, a Lakota actor from South Dakota. “It’s about creating allies. It’s about making many voices one large voice. And we’re way overdue with that.”

Allie Redhorse Young founded Protect the Sacred ahead of the 2020 presidential election. She had voted early and wanted to encourage others on the Navajo reservation to do the same. Young led two horseback rides to early polling places, and on Election Day, she again rode horses with dozens of people to cast ballots.

In a 2020 interview with Harper’s Bazaar, Young said she was inspired by her dad.

“He told me he wasn’t feeling motivated to participate in this election (2020) because of the disarray we’re in as a nation, and that he was feeling frustrated about the divisiveness that is plaguing our communities,” Young told the magazine. “But then he had a vision of our people riding on horseback to heal our country, and that’s when he mentioned doing a trail ride to get out the vote.”

Of the 400,000 formally enrolled Diné, only 70,000 were registered to vote in Arizona as of the August primaries.

“We just recently had the primary election,” said Nathaniel Brown, the Navajo Nation council delegate for Kayenta and two other communities. “Unfortunately, on the Navajo Nation, even though we are the biggest tribe, we only had about 13% of our people – our registered voters – come out to vote.”

He said in-person voting on the reservation is challenging.

“Some of our people from Navajo Mountain, when they come out to vote at the county and state level, they have to travel four hours one way,” Brown said.

Navajo County has 39 vote centers, but just one is in Kayenta. Brown said mail-in ballots can be even trickier.

“Out here in rural Navajo Nation, which the whole nation is, we don’t have physical addresses for the most part,” he said.

That’s why Young took action to get young Diné to the polls – and their elders, too.

“It’s a demonstration to say that even though different laws have been passed the past couple of years that have aimed to suppress our votes, especially in BIPOC communities, that we’re not going to let that happen,” she said. “We’re still going to show up in our power. And by voting, we’re reclaiming our power.”

“At the end of the day, some of the rules that exist right now are not working for us. So, we have to begin to figure out a strategy and vote for things that are going to work out for us. I think it’s a necessity that we all vote; we make the difference,” Diaz said.

Keiara Wade is a member of the Compton Cowboys, another California community-engagement organization with horses and education at the center of its mission. She said the Ride to the Polls event can help break down social barriers.

“If you don’t feel important, your mind is closed. Just as simple as that,” she said. “You don’t want to even think outside of the box, so to speak, because why does it matter? I’m not important anyway.”

But Wade said voters on the Navajo Nation deserve to be heard just as much as anyone else. It’s all about meeting people where they are, she said.

“But if someone says, ‘Hey, I want to step into your world and do something that draws your attention, something that you like, but also I have an important message to get across.’ Then it will just allow them to understand: I am important, I am being heard.”

For Ride to the Polls participant Joyceline Wero, the event reminded her of her own family’s struggle for suffrage.

“My grandmother, I’m pretty sure her and her ancestors were, you know, fighting and putting their lives on the line just to hear their voices heard,” Wero said. “But yet, I’m here and all we have to do is register, sign and register to vote.”

Though voter turnout has historically been low on the Navajo Nation, numbers have spiked during the past two presidential elections. Voters on the Navajo and nearby Hopi reservations have cast nearly 20,000 more votes in 2020 than in 2016, according to election data.

Piper Perabo, an actor and advocate for voter participation from New York, said during the event that the potential of voters in the largest tribal nation is too great to ignore.

“If Navajo Nation was all voting, woof! You could move some things around. … The minimum wage, how the environment is protected, the public schools, the health care systems,” Perabo said. “That’s all decided at the state level. And Navajo Nation is so big that if it voted together, could make a lot of change.”