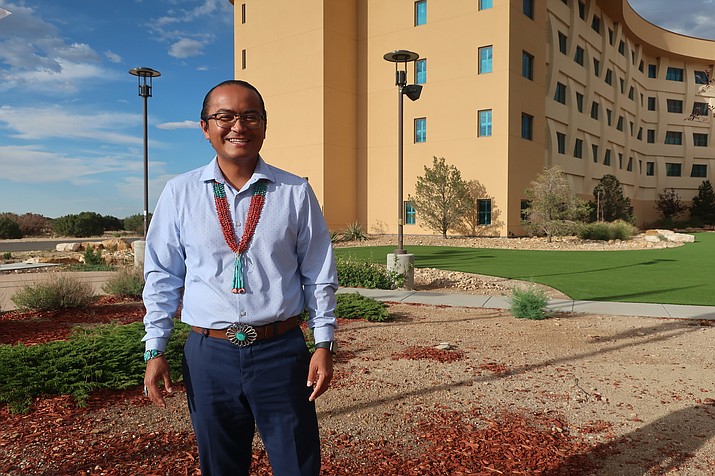 Buu Van Nygren poses for a photograph before a Navajo Nation Presidential forum at a tribal casino outside Flagstaff, Ariz., on June 21, 2022. Navajos next week will choose whether to elect a president who has never held political office or one whose career in tribal government spans two decades. Incumbent President Jonathan Nez and challenger Buu Nygren emerged as the top two vote-getters among 15 candidates in the tribe's primary election in August. (AP Photo/Felicia Fonseca, File)

FLAGSTAFF, Ariz. — Navajos next week will choose whether to elect a president who has never held political office or one whose career in tribal government spans two decades.

Incumbent President Jonathan Nez and challenger Buu Nygren emerged as the top two vote-getters among 15 candidates in the tribe's primary election in August.

Both want to ensure that tens of thousands of people on the country's largest Native American reservation have access to running water, electricity and broadband. The coronavirus pandemic highlighted the lack of basic services across the Navajo Nation and led to more than $2 billion being allocated by the federal government, some of which will fund infrastructure projects.

Nez ascended to the presidency after serving as a community leader, council delegate, county supervisor and tribal vice president. He has infused Christianity into the job while promoting a resurgence of Navajo culture and language, particularly during the pandemic when Navajos were encouraged to stay on the reservation.

Nygren was thrust into the political scene four years ago when Joe Shirley Jr. picked him as his running mate after Shirley's initial choice didn't pan out. Nez got nearly twice as many votes as Shirley, denying him a third term in office. Nygren resigned from a job in construction management to seek the tribal presidency.

More than 126,000 Navajos are registered to vote in the tribe's general election on Nov. 8 that will also determine the makeup of the 24-member Navajo Nation Council — often seen as more powerful than the presidency.

Nez and Nygren are limited to raising about $180,000 each for the nonpartisan race, including the primary. Donations can come from Navajos only.

Radio plays a huge role in campaign advertising because of the remoteness of the vast 27,000 square-mile (70,000 square-kilometer) reservation. Candidates also spend countless hours on the road meeting with voters in tribal communities and off the reservation.

The tribe has the largest land base by far of any other Native American tribe in the U.S. and its population of about 400,000 is second only to the Cherokee Nation of Oklahoma.

Nez selected law school graduate Chad Abeyta as his running mate. Nygren chose Richelle Montoya, who is president of a Navajo chapter on the New Mexico side of the reservation. The tribe has never elected a woman as president or vice president.

Nygren's energy in some ways resembles what Nez exhibited in the 2018 election where he positioned himself as a young candidate ready to work on a to-do list generated by talking with Navajo voters. Nez's tone is more measured now, as he works to assure Navajos that progress is being made but takes time.

At a recent debate at Arizona State University, Nygren suggested Nez's administration has moved too slowly on negotiating water rights in Arizona and establishing an office in Phoenix to serve urban Navajos. He also criticized the president for what he said was needless spending on a tribal office in Washington, D.C. and the purchase of property off the reservation.

"If you're losing faith and hope that we can have a better future for tomorrow, then you should step aside," Nygren said to Nez at the debate. "But as your next Navajo Nation president, I am full of hope with aspiration for a better Navajo Nation."

Nez countered that Nygren doesn't understand how tribal government operates and hasn't built a network of local, state and federal leaders to advocate for funding and other resources for the Navajo Nation.

Nez also has pushed back on assertions that his administration was too strict in implementing measures during the pandemic in which more than 1,900 Navajos have died. Nez's administration ordered lockdowns, curfews and other restrictions.

Businesses on the Navajo Nation haven't fully reopened, partly because of the less than a handful of confirmed monkeypox cases, Nez said.

"We took our sovereignty seriously," he said in an interview. "We have the ability to govern ourselves, and we kept that mask mandate in place. And if you ask Navajo people, they'll say we had to do that to keep our people safe during the pandemic, and they accepted that."