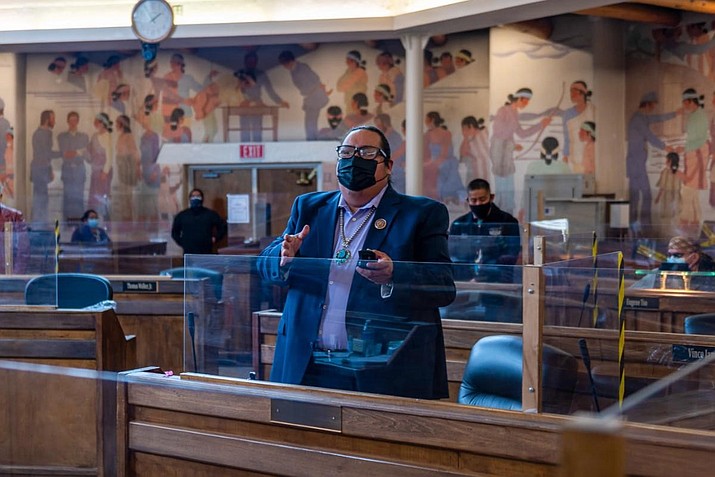 Damon was on a private vacation in Las Vegas to attend the Indian Nationals Finals Rodeo when he was photographed in a casino slumped over a slot machine, appearing intoxicated.

On Oct 27, Damon addressed the issue by saying the photograph was “unauthorized” and he would be working with the Navajo Nation Council on any potential disciplinary action.

“As a father and grandfather, I learned the importance of truth and acknowledging wrongdoing,” he said in a statement. “I send my apologies to the Navajo people and the communities I represent for any ill-will or embarrassment this photograph caused.”

The Navajo Nation Council met Oct. 28 to address the issue and later announced legislation that would place Damon on administrative leave beginning Nov. 5, The council can take action on the bill after the five-day public comment period ends.

“When the members of the Navajo Nation Council select and confirm their speaker, they do so with the expectation that the selected speaker can be trusted to be their Natahnii’ and lead the council by example with honor, integrity, veracity and reliability at all times; they do not expect their leader, the speaker, to violate their trust and bring disrepute to the council,” the legislation reads.

Damon faces not receiving the additional salary he receives as speaker, but would continue to receive the compensation he receives as an elected council delegate.

The speaker pro tem would be shared by council delegates on a rotating basis.

“When Speaker Damon complied with the Dine Navajo fundamental law or principle of Bee K’ endzisdlii’ and accepted personal responsibility by reporting his actions to the Navajo Nation Council, as well as issuing a public apology to the Navajo People, Speaker Damon must still face the consequences and repercussions of his conduct,” the council said.

Damon said in the statement that he will work with traditional and spiritual healers, and behavioral health advisors to address his alcohol use.

The consumption of alcohol is illegal on the Navajo Nation, except at the Antelope Point Development Area of the Navajo Nation. Glen Canyon National Recreation Area and Navajo-owned casinos like Twin Arrows outside of Flagstaff and Fire Rock in New Mexico.