A Navajo's passion for piano
Renata Yazzie set to graduate with advanced degree in musicology with a focus on ehtno-musicology and piano performance. She's not done, she's only getting started 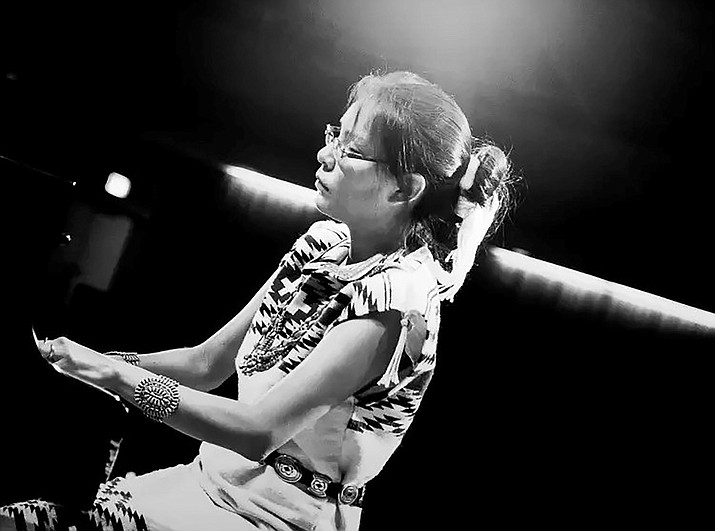 Renata Yazzie remembers being around three and making up songs on the piano. One of them was about an elephant with cluster chords, which are at least three adjacent tones of a scale played at the same time.

“It kind of sounded like banging on the piano,” she said.

Her mom, a classically-trained pianist, would play and Yazzie would listen.

“We always had a piano in the house. My parents tell me that as soon as I could walk I was crawling up the stool and playing the piano,” she said.

She would try to learn how to play a song by ear and first learned “Joy to the World.”

Her mom enrolled her in piano lessons at four, which she would take for six years. She would shortly move to the Navajo Nation and wouldn’t take classes again until college.

Now, Yazzie is nearing her graduation day in May, receiving a graduate degree in music from the University of New Mexico with a focus on musicology and piano performance, perhaps becoming the first female Navajo citizen to achieve that.

Yazzie said it’s an honor to be the first female Navajo citizen to have a musicology degree but all Navajo people are musicologists in their own right through song.

“The way that songs are intertwined into the way of life, Navajo way of life, even if somebody isn’t traditional there’s still a value of music — the value that is given to music and songs,” she said.

She remained passionate about music even when she attended university as a pre-med student. She wanted to be an allergist because it took a long time for a doctor from Indian Health Services to correctly refer her to an allergist.

“I wanted to fulfill that need and help other people breakout of that cycle of just going to IHS to get their symptoms treated and not actually getting to the root of the issue,” she said.

In effort to help other music students, she established the American Indian Musicians’ Scholarship in 2018. They awarded its first recipients last year and hope to one day provide a full scholarship.

“I wanted Native kids to know that if they wanted to study music that there’s going to be an organization that would back them up and give them the financial tools, the networking tools they would need,” Yazzie said.

This year's application will open at the end of April.

She said she’s not studying other music, but her music — Navajo music.

“The ethno stem is a way of othering,” Yazzie said. “It’s used to describe anything that’s not western, (which) is basically what ethnomusicology is.”

She said decolonization in musicology is a hot topic today. She and her other Native friends, who are pursuing musicology degrees, frequently engage in events related to ethnomusicology theory, music theory and musicological research.

“We like to ask questions and promote conversations that ask White scholars to consider their positionality and to consider their intent behind why they're doing their research, especially if they’re researching Indigenous music,” she said.

Yet, some don’t like to be challenged or corrected. They approach the topic through a “kind of White savior attitude,” she said.

But not all interactions have been jarring. Some are willing to learn and change.

Yazzie recalls a presentation where a group of scholars discussed the need to decolonize early music — particularly music from Western Europe in the 16th and 17th centuries. They wanted to create a website that showed early music from other countries that would be accessible for everyone.

At the Q&A, Yazzie brought up that they weren’t doing decolonization work and if they have read from Indigenous scholars about what that means.

They later redid their presentation, stopped using the word decolonization and reframed it by titling it diversity, equity and inclusion instead.

For over a year, Yazzie did her master’s thesis on Navajo hymns, how they came to be hymnal translations in the Christian community on the Navajo Nation and how hard it is to translate in general. Her cheii (grandfather) Paul Redhouse's translation and interpretation work were important to her thesis. He was a minister who oversaw and translated over 50 hymns into Navajo for the hymnal book, “Jesus Woodlą́ą́jí Sin: Navajo Hymns of Faith,” which contains 365 hymns.

She said many anthropologists and musicologists have attributed translation work to White missionaries.

She found, through archival research, that out of 60 individuals and five groups/entities from 1922 to 1979, who did the hymnal translations, 85 percent of them were Navajo.

“It was hard to write but it was necessary to write because nobody had been giving credit where credit was due. It was Navajo people who were doing this work and nobody had recognized their efforts and recognized all the hard work they did over the span of half a century,” she said.

Yazzie wonders how this may shift the conversation of Christianity on the Navajo Nation. The thesis is expected to be published this summer.

She added there needs to be humility when doing research about Native subjects, music or cultural ways of life. And it’s OK to not know everything and it’s important for non-Natives to collaborate with Native people rather than trying to be the leader of information.

“For both Native people and for non-Native people who are looking to learn more about Native music — [it] is to start with a humble heart,” she said.

Yazzie said her time at the University of New Mexico was difficult. There were instances where Native students were singled out in the classroom and on stage. She would have to talk to the chair or professor and explain how it was wrong.

She said there were about four to five Native students in the music department that dwindled down to her and another girl.

For her graduate recital in December, she wanted to create a Native space. She said she struggled with having confidence during her performances but this time she had fun while performing.

Footracer was able to watch her recital online and emailed Yazzie. He said, “Náníl txąshí bei ną'a'néhí nizhóní,” meaning that which you play by plucking at — it is beautiful. It essentially means “your piano playing is beautiful.”

Dozens of people gathered to eat Navajo tacos, blue corn mush, Navajo tea, and a three-tier blue corn cake that had the Monument Valley landscape on the side and a piano made out of fondant icing on the top.

“We like to eat; we’ve always eaten. That’s just kind of fundamental to Native gatherings,” she said.

And her masání, who’s in her 90s, was able to see her play. Her grandmother has heard her play the piano countless hours and Yazzie said she was in awe of the concert.

She fondly remembers wheeling her masání around the music department, and how in that moment it transformed the space into a different experience.

“She was just talking to me about how she liked the concert and everything. It was like I was in a new place. Those halls were unrecognizable. It was very homey, being with her,” she said.

The small community of Native classical musicians like to joke, make memes and bond over subjects like Bach’s violin concertos.

One of their jokes is how Bach’s name pronounced in his native language, German, is the same pronunciation as the word bread in Navajo, bááh.

Yazzie’s playing has also made impressions on others. Before the pandemic, the Isleta Resort and Casino, owned by the Pueblo of Isleta, contracted her to play the piano for guests during big events or performances. She played for hours in the hotel lobby and remembers one day when a five-year-old girl and her grandma went over to watch her play.

Yazzie heard the grandma say to her granddaughter, “See, not just White people know how to play the piano.”

“She didn’t want to leave. She was standing next to me,” she said. “Then they left and she came back with a dollar bill for my tip jar and said, ‘I’m going to learn how to play piano like you.’”