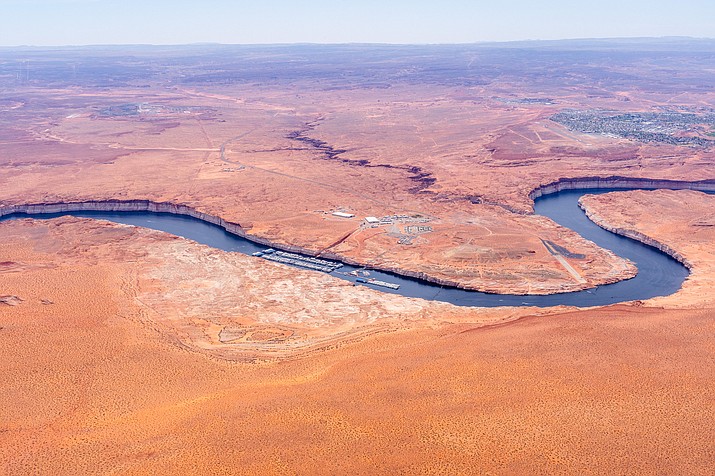 An aerial view of Lake Powell at Antelope Point Mariana in April shows how much lake levels have dropped because of severe drought conditions. (Photos/EcoFlight)

LECHEE, Ariz. — The Navajo Nation shared concerns over the lack of communication by the National Park Service for safety upgrades at the Antelope Point Mariana in Page, Arizona.

Navajo Nation Council Speaker Seth Damon and Council Delegate Paul Begay said there had been a communication and tribal consultation by the NPS regarding requested and needed improvements for launch ramps, walkway ramps and utility lines during record low water-levels impacting the Antelope Point Marina.

In a 2021 report from the National Oceanic and Atmospheric Administration’s Colorado Basin River Forecast Center, the amount of water at Lake Powell has dropped around 100 feet in the last three years because of severe drought conditions. As the depletion of water increases, the Glen Canyon Dam has lost about 16% of its capacity to generate power, potentially affecting 5.8 million homes and businesses across seven states.

Damon said the council urgently requests Glen Canyon Superintendent William Shott and National Park Service Director Chuck Sams to work with them now and said the council is concerned about the lack of communication and NPS’s continued delay in approving upgrades.

“The situation with this mega-drought impacts our farmlands, water supply levels, and the second largest reservoir in the United States,” Damon said. “The Navajo Nation has economic investments in the region and Antelope Point Marina. It concerns [us that NPS and its] continued delaying and not approving fundamental upgrades to our Navajo launch ramps, walkways, water, sewer, gasoline and natural gas lines that operate the Antelope Point Marina.”

Encompassing over 600 acres of land in the Navajo Nation, the Antelope Point Marina during the peak season, employs around 400 employees, many of whom are young people.

In 1979, the NPS developed a General Management Plan (GMP) for the Glen Canyon National Recreation Area (GCNRA) to manage the region and cooperate with the Navajo Nation in managing and developing the southern shoreline for recreational use.

“This 50-year-old quadrilateral agreement is outdated and does not respect the sovereignty of the Navajo people,” Begay said. “It has kept us from developing alongside the shoreline because the park service has jurisdiction over a buffer zone surrounding Lake Powell. The National Park Service has ignored multiple requests to approve our upgrades for the launch ramps, walkways and utility lines, posing a safety risk at Antelope Point Marina. Hundreds of young people are employed during the summer and thousands of tourists are at risk. This is complete negligence from the federal government and the National Park Service.”

Antelope Point Holdings LLC (APH) is an authorized concessioner of the GCNRA and a lessee of the Navajo Nation. The APH sent a letter in April 2021 to Shott requesting approval for two low-water temporary dock projects to accommodate larger boat vessels to reach the lake safely.

After a delayed response from the NPS, the APH sent another letter in January requesting approval for low-water main gangway access for visitors as the marina responds to decreasing water levels before the 2022 season.

“There are serious concerns regarding the safety at Antelope Point Marina, where requested improvements must be made immediately,” said Resources and Development Chairman Rickie Nez. “Should an emergency happen or a tourist gets injured, the National Park Service would be held responsible because they have ignored multiple requests for safety and essential operational upgrades. Tribal consultation by the park service is crucial as we fix this growing problem that affects the economic viability of Antelope Point Marina.”

Shott sent a letter to APH April 25 denying all requests and notified all parties that the Army Corps of Engineers and the U.S. Coast Guard had been informed of possible unauthorized dock installations and any unapproved improvements would result in citations and fines. He also acknowledged lowering water levels affecting APM but noted that “adding property or infrastructure to an uncertain and shrinking resource is not a logical option.”

“Our requests fit within the purview of our Concession Contract, and they enhance the overall public safety, welfare, and access to the waters of Lake Powell,” he said. “Not allowing the improvements to our ramp and the slips in the water and delaying approvals to improve pedestrian access have resulted in substantial operational difficulties for the marina. The decision by the National Park Service is entitled to a secondary review as time is of the essence in this process.”

According to Congressional testimony provided by Assistant Secretary Shannon Estenoz for Fish and Wildlife and Parks, the GCNRA will receive $31 million through federal supplemental disaster funding to address boat ramps and related infrastructure to combat reduced water levels at Lake Powell.

However, Begay and local leaders are frustrated with the NPS because this federal assistance will not be utilized again to address concerns at APM.

The To’ Niltoli’Task Force is working alongside the Executive Branch to coordinate a roundtable meeting to address the growing concerns of the LeChee Chapter and Antelope Point Holdings LLC to Interior Secretary Debra Haaland and the Director of the National Park Service, Mr. Chuck Sams. A joint letter from the Navajo Nation government will convey the situation to Congress and the White House this month.