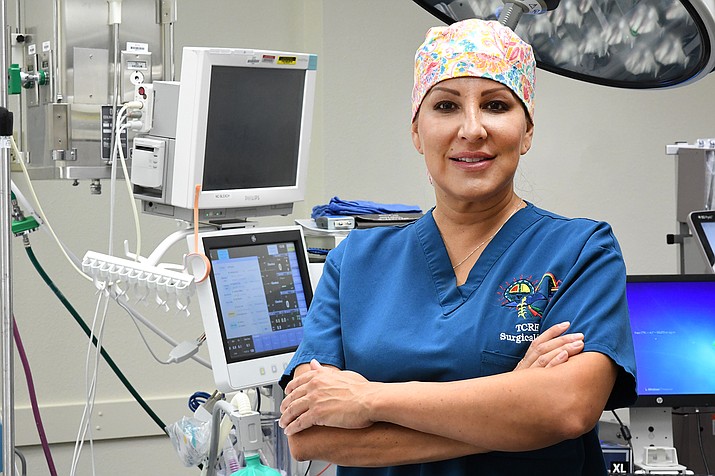 Lynette Bonar, CEO of TCRHCC, said they are fortunate to have a skilled OB/GYN physician taking care of women’s health.

“Dr. Whitehair is very deserving for this award, as her intimate knowledge of our AI/AN communities provides her insight on how she approaches and incorporates the unique challenges present across the Western part of the Navajo Nation, such as; the lack of running water and electricity in approximately 30% of our homes and the high presence of health disparities,” Bonar said.

In a news release, the American College of Obstetricians and Gynecologists said it was extremely pleased to announce Whitehair as the 2022 recipient of the award for her career-long commitment to the highest standards of clinical care for American Indian and Alaska Native Women.

Whitehair said she was honored and privilege to be the 2022 recipient of The William H.J. Haffner award.

“It is a privilege to serve the women of the Navajo Nation and to be their obstetrician and gynecologist,” she said. “I am thankful for their trust and acceptance in the community. I hope to continue to advocate for Indigenous women’s health for many more years to come.”

During the height of the COVID-19 pandemic Whitehair did more than just see patients, she also coordinated with off-reservation organizations to deliver masks, hand sanitizer, food, cleaning products and other supplies to the community.

This past December, she also provided testimony at the White House’s Maternal Health hearing organized by Vice President Kamila Harris. The topic was on improving maternal morbidity and mortality in the Indigenous community.

“Women of color carry a disproportionate burden of maternal mortality. In Arizona alone, American Indian women and Alaska Native women had the highest pregnancy associated mortality ratio and 100 percent of these deaths were considered to be preventable,” Whitehair testified. “The severe maternal morbidity rate was the highest for American Indians and Alaska natives at over 3.5 times the rate for non-Hispanic white women and the severe maternal mortality rate was again the highest for women living in rural communities versus women living in urban communities. It’s important for this data to be analyzed and mandates to be enforced to change this trajectory for the future of our people.”

The award was given during a reception at the organization’s annual Clinical and Scientific Meeting which will be held May 6-8.

Whitehair’s desire to help began while growing up in Southern California. The passion to return to the Navajo reservation and help her people is what led her to the field of medicine.

At Tuba City, Whitehair serves as the chief of Surgical Services and staff obstetrician and gynecologist. Since 2012, she has been a clinical assistant professor of obstetrics and gynecology at the University of Arizona School of Medicine. During her years at Tuba City, she has presented a variety of educational topics at local, regional and national medical meetings and conferences.

Whitehair is married and has two daughters.