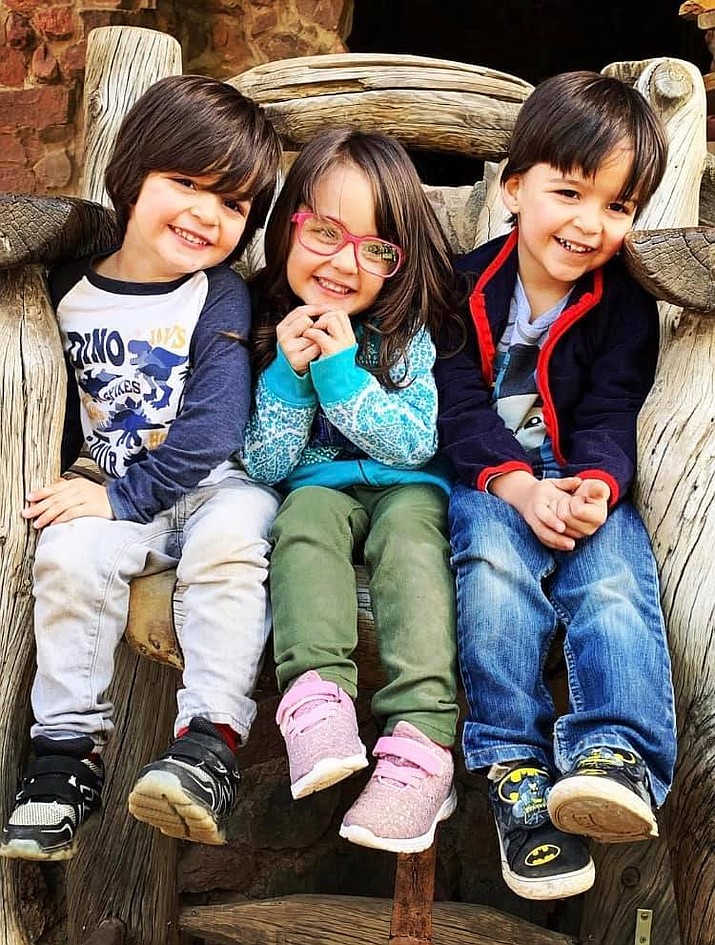 Kids show off their new shoes they received from the Tennies for Tots program. (Submitted photo)

This covered four counties, including two centers in Winslow and two in Holbrook, which have been recipients for a couple of years, and 10 more in the Navajo and Apache counties which included Round Valley, St. Johns, Blue Ridge, ShowLow, Snowflake and Clear Creek.

“Tennies for Tots program is relatively new to Page,” explained Janice Nockideneh, Page Head Start director. “But as you can imagine, preschool children grow so fast…they need several pairs of shoes a year. The program helps ease the financial burden and the children come to school the next day proudly showing off their new shoes.”

“Tennies for Tots helped 300 kids with new shoes and socks at ten centers.” explained Rosanne Vargas Family Support Specialist for Head Start. “The look on our kids face … is priceless’ and they can’t wait “to show the Teachers how fast they can run in them.”

Sedillo, who lives in Paulden, Arizona, not only delivers all the shoes, but also raised the lion’s share of the money to buy them. With a nose for bargains, Sedillo figured out how to get the shoes for fewer than $7 a child. She also works full time as office manager at Good Sam’s Willow Wind Assisted living in Prescott.

Its a challenge for Sedillo to find the time for the project, but finds the challenge rewarding.

“The children living in these circumstances have no control and can’t go get a job. They are babies. As community, it is our responsibility to help these children,” she said. “They need to know there are people out there who care.”

Sedillo was born and raised in Flagstaff. Her family owned and operated Sedillo Cleaners for over 30 years. She and her siblings worked in the family business until they graduated from Coconino High School.

Sedillo remembers her parents Jimmy and Nora always reaching out to help someone who was down on their luck, and also the pride her father took as a leader in his part with the Coats for Kids program.

“They washed and dry cleaned all the coats that were donated for 20 years,” Sedillo said.

Life as a single mom wasn’t always easy, but she always knew she had a family that was there to help. Her boys attended the Ponderosa Head Start facility in Flagstaff when they were little.

“So, I wanted to include them in at the beginning,” she said. “I started with four centers in Flagstaff and Prescott and its grown every year since then.”

When the recession hit in 2009 and real estate stumbled, Sedillo went to work for Good Sam as CRN. She was injured on the job and transferred to a desk job. Soon after that she went on a mission trip with Good Samaritan Society to Columbia.

“I was hooked and went again in 2016 and I returned wanting to save the world,” Sedillo said.

With the help of a Grant from Good Sam she started providing shoes for young children in Prescott. But once the word got out about what she was doing the demand went sky high. She decided to form her 501(c)3, the same year her dad was diagnosed with cancer.

Fundraising has been done with friends, family, contacts in the Prescott area and most recently, the Firefighter Angel Foundation in Prescott.

Sedillo said the Foundation has decided to partner with her because their missions are so closely aligned. Allowing her to set a booth at many of their events has let the community know what she is doing, and the response has been heartwarming.

Sedillo now has a website up and running, www.tenniesfortots. org, and has qualified as a AZ Tax Credit Charitable Organization, which means individuals can donate up to $400 to her charity and get a direct tax credit for the donation.

Sedillo continues to seek volunteers to assist with the project.

She not only needs help stuffing boxes, but also help with the running of the nonprofit, which includes shopping, office tasks, warehouse work and fundraising.

And if you still doubt her commitment when she was asked what it’s like to be there when the kids get their new shoes?

“I haven’t been able to attend one yet, I am working when they hand them out, hopefully this year,” she said.